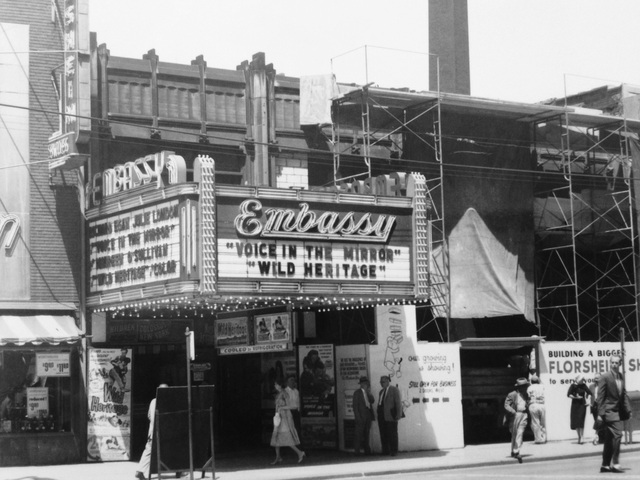 Built on the site of the Columbia Theatre, later Star Theatre & later Cameo Theatre and retaining the outer walls. The Embassey Theatre was opened October 16, 1938 with Robert Young & Lana Turner in “Rich Man, Poor Girl”. The Embassy Theatre in downtown Cleveland also continued to show movies long after the Allen Theatre, State Theatre, Ohio Theatre, and Palace Theatre had closed. Like the Hippodrome Theatre, the Embassy Theatre courted a largely minority audience in the 1970’s with black-oriented action films. The Embassy Theatre closed on December 1, 1977, and was demolished to make way for the National City Bank headquarters.

The Embassy Theatre was a relativly narrow auditorium and looked to have about 2000-2500 seats all on one floor, there was no balcony or stadium. As I recall it was art-deco style, with tall narrow milk-glass lamps hanging in the auditorium. There were shorter, wider versions of these lamps in the lobby. There was a stage with the screen, but I don’t know if it was a working stage. The ceiling of the auditorium was flat plaster, no dome, with some minimal painted geometric design. The auditorium was not closed off from the lobby, there was a standee rail behind the last row of seats and was offset to the right from the lobby. The back 3 or four rows of the left side section of seats had been removed and a concession stand installed, separated from the auditorium by only curtains. When I was there last in about 1971 it was a grind house, and could not see a lot of the detailing of the auditorium.

The Embassy Theater site housed three previous theaters, the Columbia, Star and Cameo theaters, all of which could be classified as houses for high burlesque. The Embassy, which actually retained the outer walls of these predecessors, was built with a completely new interior structure and designed as a motion picture theater. It opened on October 16, 1938, with the feature Rich Man, Poor Girl. Considerably less ornate than the more established downtown houses but with lots of chrome and velvet, the Embassy was also smaller with seating for only about 1,200. Operated as part of the Community Circuit Theaters group, the Embassyâ€™s niche was to play second-run movies or first-run double-feature â€œBâ€ films. That niche, however, must have been important, for the theater did rather well. The Embassy continued in business until December 1, 1977, closing only to make way for the National City Center development.

From Euclid Avenue-Clevelandâ€™s Sophisticated Lady by Richard E. Karberg and James A. Toman

A picture of the Embassy can be seen here:

Though I have never been to Cleveland, I remember looking in Variety during the 1970’s and seeing what theaters grossed and what they were playing. I seem to remember, the Embassy’s last feature was a double bill of “Carrie” and “Demon Seed.”

From the Encyclopedia of Cleveland History….

The EMBASSY THEATER, 709 Euclid Ave., one of downtown Cleveland’s last movie theaters, was built by Waldemar Otis as the Columbia Theater and opened 12 Sept. 1887, premiering Hanlon’s Fantasma. It boasted a tunnel leading to the Oaks Cafe on Vincent St. and marble stairs leading to a mahogany bar on Euclid Ave. On 17 Feb. 1889, it became the Star Theater, managed by W. Scott Robinson and Jas. S. Cockett, until 29 Aug., when Frank M. Drew took over.

Vaudeville, melodrama, and comic opera were offered until the 1890s, when burlesque was introduced. The Star was a “refined” burlesque house; women viewed the show from a side balcony, separated from the male audience by a heavy curtain. Some of the stars who played there included the Al G. Fields Minstrels, Ted Healy, and Weber & Fields. Renamed the Cameo Theater, it opened in 1926 as a motion-picture house. Loews took over the theater in 1931, and the building was remodeled.

In 1938 the Cameo was razed (except for the east and west walls); the Embassy Theater went up on the site and opened on 16 Oct. The tunnel was removed, and the theater was furnished with air conditioning, gleaming chromium, velvet hangings, and indirect lighting. Seating capacity was 1,200. During the 1970s, it became a showplace for action-type karate films. Owned by Community Circuit Theaters, the Embassy was closed on 1 Dec. 1977 and razed to make way for the Natl. City Bank building.

The thing I remember most was that if you were there during the day watching the movie, if anyone came into the lobby from outside the light through the doors would reflect onto the screen.

This was on the show American Pickers tonight. They interviewed someone that was trying to save the theater at one time and he actually had some of the Art Deco style light fixtures in there that they bought

Home from college at Christmas, I saw BULLITT at the Embassy playing first run there for weeks. Too bad they tore it down and the stunning Moderne Art Deco Bond building on the corner for the bland death star National City Bank Tower and block. I suppose it couldn’t support showing films much longer but now it would be right near the bustling 4th St. restaurants and bars and could have possibly been used as a music venue. And at least save the beautiful marquee.