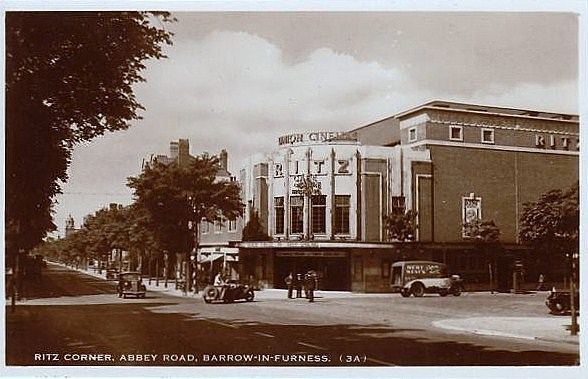 This cinema occupied a prime corner location in Barrow and looked spectacular when illuminated with its many neon lights. It was built by James Brennan and was to have been named Roxy Cinema, but it was taken over by the Union Cinemas chain prior to opening. It opened as the Ritz Cinema when it opened on 14th September 1936 with Jessie Matthews in “Its Love Again”. It was the second cinema in Barrow-in-Furness to have a Compton theatre organ, this was a 3Manual/6Ranks model and the illuminated console rose on a lift out of the stage, and was opened by organist Alex Taylor. The Ritz Cinema also boasted having a cafe for the convenience of its patrons.

Union Cinemas were taken over by the Associated British Cinemas(ABC) chain in October 1937. It was re-named ABC in 1961. The ABC was closed on 15th January 1977.

It was taken over by Hutchinson Leisure Ltd. and re-opened as the Astra Cinema, and was soon converted into a triple screen cinema, re-opening in June 1977 with 640 seats in the former circle, and 260 seats in each of the screens in the former stalls. In the late-1980’s it was taken over by Apollo Leisure and was re-named Apollo Cinema. They had plans to convert the building into four or five screens, but when the opportunity came to build a new multiplex in the town, these plans were dropped. The 3-screen Apollo Cinema was closed on 20th February 1999. The new 6-screen Apollo multiplex opened the following day.

There was talk about the building being converted into a Chinese restaurant, but after a fire in the derelict building in 2003, it was demolished

Phoenix Paranormal Investigations, who investigated the cinema on 26th February 1999, reported that despite the £200,000 spent on tripling, back stage sewerage was leaking into the old band rooms, and the area was rat infested. The brickwork was tatty and crumbling, the walls were cracked and the paintwork dirty and peeling. The whole building look rough and beyond its usefulness.

Reopened in June 1977 after tripling. Press reports state a fourth screen was added in the bar area in March 1995. The cinema was reputed to be haunted by a little girl in a red coat. Barrow-born John Duffin has committed some images of the cinema to canvas see: http://www.johnduffin.co.uk/digital/2007/index.html

The cinema had a wide proscenium arch which allowed a CinemaScope screen to be easily installed.

I do not know its dimensions but watching a Scope film from the front circle was an impressive experience.