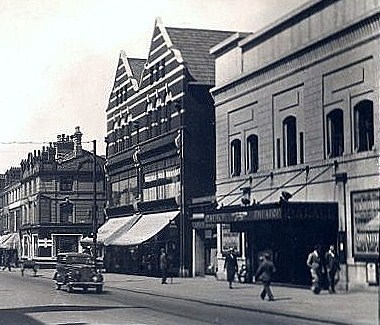 Located almost opposite Barrow-in-Furness Town Hall. Possibly opened as the New Royal Amphitheatre in 1873, it was designed by architect Arthur Worrell. By 1896 it was known as the Palace Theatre. It was also used by the Salvation Army in the late-1890’s until they built a purpose built Citadel on Abbey Road in 1910. Alterations were carried out to the Palace Theatre in 1912 to the plans of architect George Walker, and the seating capacity was given as 2,000. It was converted into a full time cinema in 1915.

By 1925, the Palace Theatre was operating as a cine-variety theatre. It was closed in November 1930 for modernisation and re-opened on 8th August 1931 as a full time ‘talkie’ cinema, with Eddie Cantor in “Whoopee”. It was now operated by James Brennan.

The Palace Theatre was taken over by the Union Cinemas chain in August 1936, and they were taken over by Associated British Cinemas in October 1937.

On 28th October 1948, the Newcastle based Essoldo Circuit took over the Palace Theatre. They closed the Palace Theatre in March 1963. It was converted into a bingo club, and in the mid to late-1990’s was operating as a Cascade Bingo Club. It has since been demolished and a branch of Wilkinson hardware stores was built on the site.

Are you sure this was built in 1873? The Salvation Army was still very much in its infancy in the 1870s, and I doubt it had reached the provinces until the 1880s, with purpose-built citadels arriving much later.