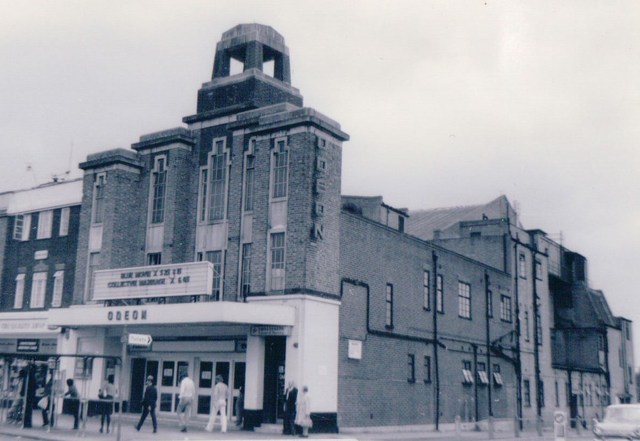 Located opposite Hounslow West Tube (underground) rail station in Hounslow, Middlesex, today part of west Greater London. The Ambassador Cinema was a project of London & Southern Super Cinemas Ltd. chain of which the architect Major W. J. King was a director. It opened on 7th September 1936 with Walter Huston in “Rhodes of Africa” and Otto Kruger in “Living Dangerously”.

Externally the Ambassador Cinema was similar to several other cinemas designed by Major W.J. King and had a square tower feature over the main entrance. The interior was in an Art Deco style and was equipped with a Compton 3Manual/8Rank theatre organ with melotone attachment and an illuminated console. This was opened by Edgar Peto. The cinema also had a cafe which had a garden.

It was taken over by the Oscar Deutsch chain of Odeon Theatres Ltd. in July 1937 and re-named Odeon from 16th April 1945. From time to time it was advertised as the Odeon Hounslow West.

It was converted into a triple cinema from 16th June 1974 when there were 490 seats in the former balcony and two screens in the rear stalls which each had a seating capacity of 114.

The Compton organ was retained for concerts which proved popular and the instrument was re-furbished in 1977. Unfortunately the Odeon was closed on 7th January 1984 with “Jungle Book”, “Krull”, and “Never Say Never Again” being the final films.

The organ was rescued from the building to be relocated, as the auditorium was demolished within a week of closure. The frontage of the building was retained and shops, a restaurant and a Gateway supermarket were built on the site. Today it is a Somerfield supermarket.

As a footnote: The Compton organ was placed in storage for many years. It has now been fully restored and has been installed in the foyer of the 6-screen Movieland, Newtownards, Northern Ireland.

The Odeon Hounslow photographed in August 1949:
View link
A closer view of the entrance as seen in March 1961:
View link

Another cinema we enjoyed after it closed as well as before it closed (see ABCHouslow) I have a photograph of me being presented with a Lego train in the Foyer in 1974. I won a newspaper drawing competition. I owned one of the red velvet curtains from this cinema for years after it closed. Eventually, it was consumed by moths!

Thanks for the photos, have many fond memories of seeing great movies here in the 1970’s, including Star Wars. I remember this first played on Screen 2 since no one was sure who the stars or director were. On Screen 1 was a totally naff version of Spiderman. They soon changed screens around though once Star Wars took off !

I remember the sweet shop next door with much fondness also :–)

It had the same name for many years.

Star Wars opened in the US in May 1977 and initially in 1 screen in London on Boxing Day 1977. It opened wider at Easter 1978 – I saw it on screen 1 in Staines and queued around the block. By the time it arrived in Hounslow West everyone knew about it. This was my local childhood cinema and I had many happy memories here.

This was the first cinema experience for me which included attending Saturday morning matinee often followed by singing practice somewhere upstairs, behind the scenes.There were about six or eight of us for singing. I also saw my first James Bond movie here, Goldfinger in the 1960s.