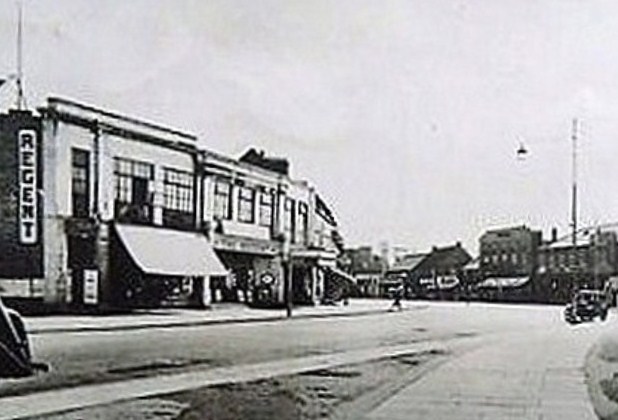 Located in Hayes, Middlesex, today a district in the west of Greater London. Built only yards away from the former Hayes Cinema, and located on the same side of Station Road. The Regent Cinema opened on 1st December 1924 with Betty Compson in “The Royal Oak”. All 834 seats were on a single floor.

In 1931, it was closed for reconstruction to the plans of architect Frank C. Spiller. The entire frontage of the building was rebuilt in white Portland Stone, and it was given a two colour neon surround. Inside the auditorium, a balcony was added to give a new increased seating capacity of 1,100. There was a lounge and a cafe for the convenience of patrons, and also a dance hall. Re-named Regent Super Cinema, it had rear projection, with the projection box located at the rear of the 40 feet deep stage which was also used for variety performances. The proscenium was 27 feet wide.

The Regent Cinema was closed in 1938 when plans were announced to built a new ‘super cinema’ almost opposite (this would be the Ambassador Theatre). The Regent Cinema stood closed and unused throughout World War II, and re-opened on 16th February 1948 as a live theatre with a production of “When We Are Married”. Producing plays in repertory, future stars who played the Regent Theatre were;Leo McKern, John Le Mesurier, Patrick Cargill, Stanley Baker, Kenneth Williams, Diana Dors, Kay Kendall, Joan Sims, Donald Pleasance and Honor Blackman. Playwright John Osborne was also involved with the Regent Theatre.

It was closed in 1954 and was demolished to build a branch of National Westminster Bank.