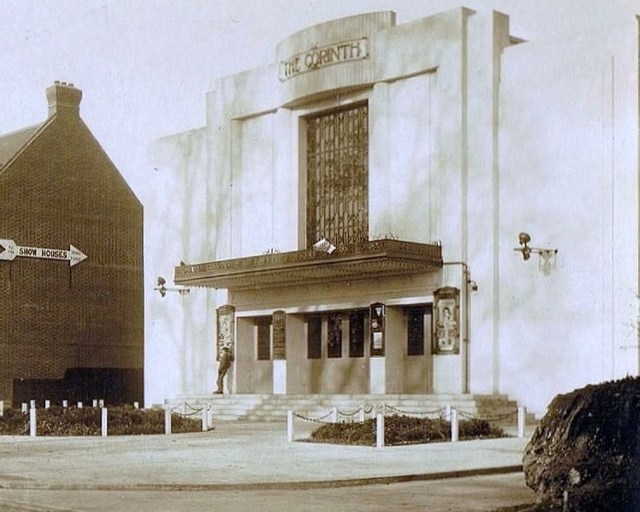 Located on a new development named Corinth Parade on the Uxbridge Road between Gledwood Drive and Lansbury Drive. The Corinth Cinema was opened on 5th August 1933 with Jesse Matthews in “The Man From Toronto” and Basil Rathbone in “After the Ball”. It was built for Messrs. Corinth (Hayes) Ltd., a company that Oscar Deutsch (the founder of Odeon Theatres) was a director of, but it remained an independent cinema. The cinema had a white Portland Stone facade, with a central window and the name ‘The Corinth’ above. The auditorium had seating all on a single floor, it had a 36 feet wide proscenium, but only a 16 feet deep stage, although it was used for variety performances in the early days, and there were two dressing rooms. There was a free car park for patrons. The Corinth Cinema was a second run cinema.

The Corinth Cinema was purchased by the Newcastle based Essoldo Cinemas chain in 1949 and it was re-named Essoldo. In 1954, it was the first cinema in the area to be equipped with CinemaScope and stereophonic sound and played first run 20th Century Fox feature films.

The Essoldo chain purchased the much better nearby Savoy Cinema in 1957, and they closed the Essoldo (ex Corinth Cinema) on 8th July 1961 with Carol Lynley in "Return to Peyton Place" and Yu Hsin Chen in "Shot in the Dark" (Hei ye Qiang Sheng). The building was demolished in November 1961 and a multi-storey office block named Colman House was built on the site (today known as Pointwest).