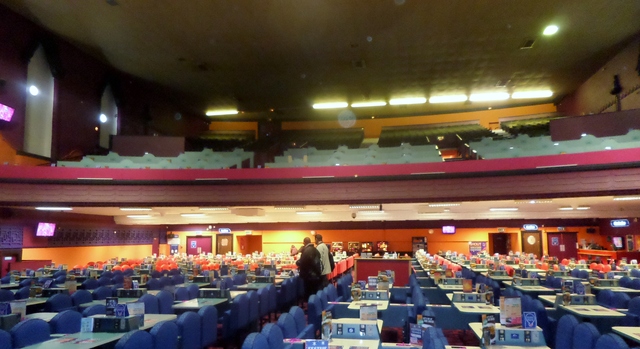 The Savoy Cinema was one of a small chain of ‘Savoy’ cinemas promoted in the outer London suburbs by independent operator A. Glassman. All were designed by noted cinema architect George Coles, and here at Hayes he again designed a magnificent cinema.

The Savoy Cinema opened on 2nd January 1939, only fourteen days after the nearby Ambassador Theatre had opened. The opening feature film was Ginger Rogers in "Having Wonderful Time" supported by Richard Arlen in "The Call of the Yukon". On stage was Leon Cortez and his BBC Band of Coster Pals with Doreen Harris in the "BBC ‘APPY 'ARF 'OUR". The Compton 2Manual/8Ranks organ with illuminated console was opened by organist Norman Tilley.

The imposing facade of the Savoy Cinema is set well back from the main Uxbridge Road. The style could be described as Italian Renaissance with buff brickwork, three large arched windows that are framed by four Doric columns. A miniature balustrade runs across the top of the building. The foyer had Australian walnut panneling on its walls and there were marble stairs leading to the circle foyer and cafe. Seating inside the auditorium was provided for 1,452 in the stalls and 800 in the circle. There were three decorative niches in each side wall and a large decorative grille on each side of the proscenium, containing the organ chambers. A large central laylight in the ceiling illuminated the auditorium. The proscenium is 48 feet wide, the stage 22 feet deep and there were two dressing rooms. Some big name stars appeared at the Savoy Cinema over the years, including Max Miller, Josephine Baker, Will Hay Jr., Jack Payne and His Band and in later years Adam Faith.

The Savoy Cinema was sold to the Newcastle based Essoldo Cinemas Ltd. chain in 1957. Essoldo already ran the nearby Essoldo Hayes (former Corinth Cinema) and they closed that in 1961. The Savoy Cinema was re-named Essoldo from 14th October 1962. It was closed on 14th October 1967 with Gordon Scott in "Goliath and the Vampires" (Maciste Contro il Vampiro) and Richard Garland in "Attack of the Crab Monsters".

It was converted into an Essoldo Bingo Club, later becoming a Ladbrokes Bingo Club and for many years it has been a Mecca Bingo Club. The once lavish entrance foyer is now lined with slot machines and has a false suspended ceiling. The circle foyer has been converted into office space, and strangely, inside the auditorium a plain false ceiling has been suspended just beneath and hiding the original decorative ceiling.

After the Essoldo closed, Hayes was without a cinema, until five years later, when Classic Cinemas opened a 400 seat cinema above a supermarket that had been built adjacent to the Essoldo.

Is the interior as well maintained as the former Savoy/present Mecca Bingo Club in Burnt Oak? This should be a listed building like Burnt Oak.

nickdrew; Yes this former Savoy is comparable to the Savoy/Mecca Bingo Club, Burnt Oak, and is well maintained. The downside with Hayes, if my memory serves me right on the last time I saw inside the building, was that for some inexplicable reason, a false suspended ceiling has been erected inside the auditorium, therefore hiding the original ceiling decoration and its light fixture. I am sure it must still remain above the false ceiling, or maybe something happened to damage the original ceiling and covering it over was the only/cheapest option. Also the original foyer decorative treatment has been entirely covered over with panelling and a false ceiling has been added to this area.

Looking at the first of the pictures posted on Oct 3, I thought I remembered going to a small cinema located above the bingo hall in THIS building, rather than the one next door. I’m sure it was accessed via one of the blue doors to the lower left front of the facade. Does anybody ELSE remember this, or have I had a COMPLETE brainstorm for the last 20 years or so?

Keith, You are correct (up to a point). The entrance to the Classic Cinema, built adjacent and above a supermarket, was through a former shop unit in the Savoy (Essoldo) building. Here is the CT page for the Classic Cinema: /theaters/30167/

Thanks very much. When you went up the stairs to the classic, you had no idea it was actually in the building next door – fiendishly clever…..