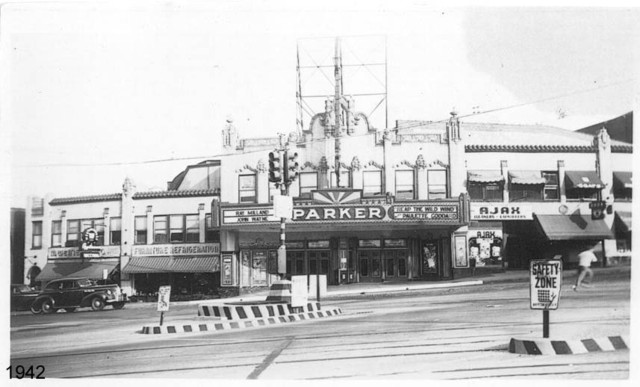 The Parker Theatre was one of the two movie houses in Darby, Pennsylvania, operational during the mid-20th century. In 1941 it was operated by Warner Bros. Circuit Management Corp.

Found this clipping of the Parker Opening Night

2100 Patrons thrilled by beauty of “The Parker” at Gala Opening

Darby’s palatial million dollar playhouse, the Parker Theatre, located, at Chester Pike and Parker Ave (Today Known as MacDade Blvd) was formally dedicated with colorful ceremony last night in the presence of an audience of more than two thousand persons.

There was some delay in the raising of the curtain, due, the management announced, to the fact one of the officials from Harrisburg was late in arriving to make his final inspection of the building. However the delay was soon forgotten, for when the official had completed his task, the curtain arose upon one of the greatest shows that Darby had ever witnessed. Moses Goodwin, a representative of the theatre ownership, was master of ceremonies.

An impressive tableau, opened the ceremonies of the evening, with a hoary haired “Father Time”, pronouncing the words of dedication from his throne. Then followed stirring music by the drum and bugle corps of the Albert Clinton Wunderlich Post, No. 65, American Legion, of Lansdowne, followed by the singing of “The Star Spangled Banner” by the glee club of Darby High School, and Miss Lillian Lewis, a high school Junior, taking the part of the “Goddess of Liberty.”

Following the tableau, Burgess Thomas M. Eastwood, of Darby, made a brief address, congratulating the management, and expressing pleasure at being able to witness, the consummation of a fine contribution to the life of the community.

District Attorney William J. MacCarter, Jr., followed Burgess Eastwood. He said:
“I congratulate the people of Darby who were instrumental in procuring Equity Theatres, Inc. to locate in their midst, bringing to the community the greatest thing Darby ever possessed, with the possible exception of the Darby Ram.

After Jack Rosenthal of Equity Theatres had been introduced and had extended words of greeting, the show began. There were two Vitaphone units, one of them George M. Cohan’s “The Home Towners”, Parker News Events., and a series of stage presentations.

The Dobsky Troupe of acrobats made the collective hair of the audience stand on end.
There was Earl Faber, that good fellow of the “hail fellow very well met type” who did his best to make everybody feel at home and succeeded. He was ably aided by Margie McIntyre, Dick Rich and his syncopated revelers brought some more merriment to the
evening. On the screen beside the feature picture there was a clever skit all about night clubs and night courts getting mixed up in a new kind of “legal cocktail,” while news events completed the bill.
The modern artist dipped his brush lavishly into his richest and most exotic hues when he set about creating the cinematic, home that compares favorably with many of the larger
Temples of pastime in the Quaker City. All of the designs, so well loved by the up-to-date theatre maker, are to he found in the newest addition to the long list of amusement
homes owned and operated by the combination of Warner Brothers and Equity Theatres, Inc.

Rich wood panelings give a note of elegance and sit off the otherwise bizarre mode of decoration. A generous allotment of gold leaf sets off rich designs that border the paneling at the ceiling and base of the theater, while giant chandeliers also in the “flapper mode” of artistry, give forth a rainbow of light to soften and brighten the general color scheme of gold and rose carried out in the house.

It might have been â€œold home nightâ€ at the theater judging by the number of families that turned out to fill the 2100 seats, all on first floor of the theatre. Indeed, many of Darby's
Most prominent citizens were on the program of the evening or were invited guests to see the performance and hear the talking feature picture of the program.

William H. Lee was the architect of the Parker Theatre.

Thanks for that info— I am assuming this was where the Salvation Army in Darby is now located??
Incredible that something that lavish existed in this location. Such a shame it is still not in existance for the residents to enjoy.

Actually The Parker was located where the Walgreens stands today, after the theater closed part or all of the building was used as the Delco Catering Halls

Found a picture of the Parker Theater in 1942 here.

Box Office 27 Oct 1951 states that the Darby, formerly a Stanley Warner theater, has been turned into an ice skating rink

The Darby Theater and the Parker Theater were two different theaters located about a block apart, The Darby was destroyed by fire and the Wendy theater was built on it’s site. The Parker Theater building was used as part of Delco Catering and Billiards until it was demolished between 2000-2004 to make way for the Walgreens which now occupies the site. I believe the Parker closed in the 50’s.