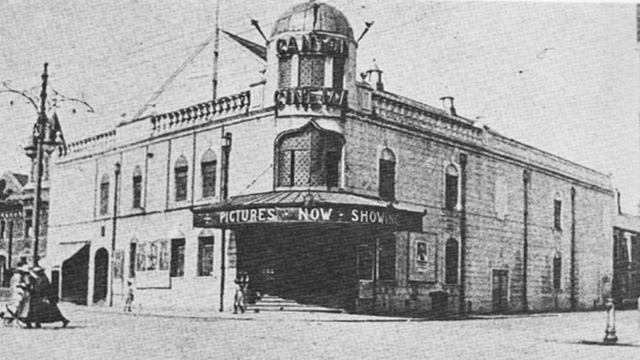 Opened circa-1914 in the Canton area of Cardiff and was extended in 1933 by demolishing two houses behind the screen end.

The entrance was moved from the corner to the opposite side where a new lounge had been added. The decorative style resembled most of the cinemas in the group.

Suffered slight damage during an air-raid in 1941 but continued as part of the locally-owned Splott Circuit (later Jackson Withers) of which two groups of four showed the same programmes and changed mid-week. For some time the Canton was grouped with the Gaiety, Tivoli and County. The other group was Splott, Ninian, Regent and Monico (of which more will be written later). The Avenue and Plaza were usually separate.

All the group were equipped with Cinemascope and decorative exterior neon lighting in 1955 and here at the Canton Cinema, the alterations were carried out by the offices of architect David Evelyn Nye. By 1958 closures had begun, the small Tivoli Theatre and the newest, the Avenue Theatre, were first to go.

The Canton Cinema closed for conversion into a supermarket, and under various owners has continued as such ever since. A dance floor built at first floor level was for some time operated as the New Capitol, replacing the former basement dance studio at the Capitol Theatre.

Presumably when the CinemaScope screen was fitted the curtains were lost as they were not used during my regular visits from 1958 onwards, the blank screen was always visible.
The side of the building has recently been re-painted Visitors to the new and refurbished cinemas at Chapter nearby can reflect that the Canton has now been in retail use for as many years as it was a cinema.

Unlike other circuits, the Jackson Withers circuit did not lay down that many hard and fast rules as to how programmes were presented.These decisions were left to their individual managers. The only demands were that trailers and advertisements were shown during each round of the complete programme.Most of the Withers halls did two rounds of the programme each day starting with either the second feature or a one off showing of a short balancer. An example of a balancer being the “Look at Life ” series which lasted between fifteen and twenty minutes. All the Cardiff houses made a point of finishing by 10.35 pm as the last buses left the city centre at eleven pm sharp on their routes through the suburbs.

I did visit the Canton a few times but cannot recall if it was using its drapes. Could it have been a management decision not to use them?

However, when houses were converted for scope it was quite common for halls to install festoons instead of drapes. I don’t think I ever operated at a Withers hall, post 1960, that did not have either drapes or alternatively festoons fitted.

When four of the cinemas in the group, in this case “Gaiety, Tivoli, Canton, County” in 1958 showed the same programme the showing times advertised were identical.
Generally the main feature was shown at about 5.15 (depending on running time) with the “Last Complete Programme” at around 7 p.m. containing , at that time, Pathe News,an occasional cartoon and what was shown on the board as “Interest”(supplied by Pearl & Dean).
The history of the building, particularly the extension , is well documented.The alteration for ‘scope, designed by the office of David Evelyn Nye,left a number of the front seats, sold as “Pit” with a poor
view

What normally happened was that Jackson Withers managers were given the starting times of the features as advertised in the papers.For obvious reasons the features were presented at those times.They also knew that they had to run the main advertisements (they were Pearl, Dean and Younger in those days)twice. The aim being to complete showing the main feature at around 10.30 pm.
The term “Interest” was another term for what the staff called “Balancers”. That is to say shorts which filled in timing holes. Usually presentations would start with advertisements followed by trailers and then either a balancer or straight on to the feature.

Outside of timing constrictions, managers had the choice of how the show was presented. That is to say how house lights, footies, breaks and interval music choices were operated and presented. For historical reasons nearly every Withers house was equipped differently and thus presentation routines were very varied. For example you could usually raise festoons while the silent BBFC certificate was showing and fade the music out in the few dark seconds before the feature came up.With drapes you had to open up the screen prior to the BBFC certificate being projected as it could not not be seen against the usual dark velvet material. Thus the footies were left on and faded out during the certificate to minimise the effect of a blank screen.

When I started at Warner Pathe in late 1955 most South Wales Cinemas took Pathe News.There were exceptions – Rank cinemas had their own Gaumont British News.Willis cinemas did not take Pathe either. By 1960 the take up of Pathe News was becoming very much reduced.It could not compete with the up to the minute news and news reels offered by the BBC and ITV. I can remember the shock and horror in the office when Jackson Withers decided not to renew their Pathe contract. Pathe news reels had a two week life. One week in a first run house and then a week in a 2nd tier house. After that the reels were dispatched back to London via FTS. Rumour had it that the expired news copies were later burnt to recover the silver in the film. I’m not sure now about the truth of this rumour but that is what all the vault staff believed at that time..

The Scope plans by D E Nye for all the group involved relatively minor alterations to the proscenium opening from (in most cases) William Wort’s 1930’s designs, removing decorative plasterwork to accommodate extra screen width.
The Canton by 1958 had no operating curtains and very little in the way of footlights, compared with the Regent’s full curtains and the Festoon curtain and lighting at the Plaza, (almost identical to the Odeon)

I am part of the team using the upstairs of this building as a Tae Kwon Do club. I was unaware of its history until I came across this site. I would love to know more.

Canton Police Station (immediately adjacent to this building) is in the process of being demolished. I wonder whether that is likely to unearth anything from the cinema’s past…?