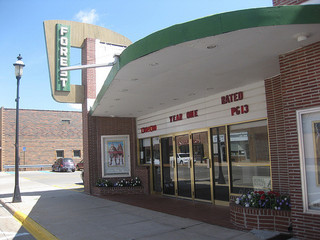 The Forest Theatre opened in the late-1910’s with seating listed at 455. From the early-1940’s it was operated Central States Theatres. It was destroyed by fire on January 10, 1950.

It was rebuilt and reopened by Central States Theatres, reopening in August 1950 with 559-seats. It was still open in 1955, but had closed by 1956. It has since reopened and is non-profit independently operated.

The theater was severely damaged in a 1950 fire, but obviously was rebuilt:

The most spectacular fire in history struck Forest City Jan. 10, 1950. It raged out of control nearly two hours and left only three bare wall of the Forest Theatre standing. Loss to the building and its contents plus the damage to adjacent businesses reached the staggering total of $125,000. Only the heroic efforts of the Forest City Fire department prevented the fire from destroying an entire half block of business buildings. The fire was discovered in the front part of the second floor of the theatre building at 8:40 p.m. The hundred or more persons attending the first show left the theatre in an orderly fashion and no one was injured in the fire.

When the flames had threatened to spread to the Soda Bar building to the north and to Olson Furniture and Lyons to the south, a call for assistance was sent out to Lake Mills, Garner, Clear Lake and Mason City fire departments. The Lake Mills and Garner trucks were the first to report. Clear Lake’s truck froze up near Ventura and was forced to turn back.

A history of Winnebago and Hancock Counties published in 1917 has a brief biography of Forest Secor which says he returned to the town of his birth (his father, Eugene Secor, was the first mayor of Forest City when it incorporated in 1878) in 1916 after having conducted a real estate business in Minnesota for some time, and bought the Forest Theatre.

The “Changes Over Iowa” column of The Moving Picture World, November 3, 1917, had this item:

I don’t know if this item from the February 3 issue of the same publication is about a second theater or if Mr. Secor changed the name of the house he bought after returning in 1916: “FOREST CITY, IA. — Park theater is now being conducted by Secor & Hewitt.”

Forest City had an opera house which the February 26, 1916, issue of The Moving Picture World reported had recently been destroyed by a fire. The 350-seat Forest City Opera House was on a list of theaters published in the September 5, 1908,issue of The Billboard. The Forest Theatre might have been built to replace the opera house after it burned, though in 1912 the MPW had reported on plans for another theater that might have been the house that became the Forest: “Forest City, Ia. — J. M. Simmons will open a motion picture theater here.”

Looking at the photo of the current Forest Theatre I would say it was a rebuild after the fire in 1950.

The recent opening of the new Forest Theater, replacing the burned house, was noted in Boxoffice of September 2, 1950.