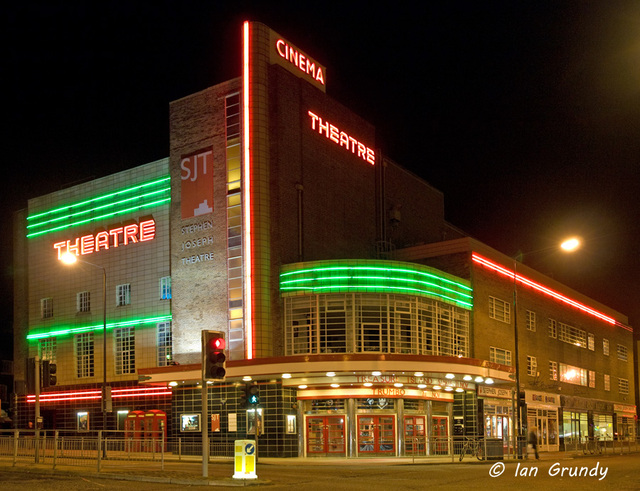 Built for the Odeon Theatres Ltd. chain operated by Oscar Deutsch. Designed by architect John Cecil Clavering, of the Harry Weedon practice with Robert Bullivant assisting, the Scarborough Odeon was one of the finest of the excellent designs Clavering produced for the circuit (Harrogate, Sutton Coldfield & Kingstanding survive, Colwyn Bay has been demolished).

It opened on 28th March 1936 with a total seating capacity of 1,711 (stalls-946, circle-765) and had unusually elaborate plasterwork for an Odeon which was by noted interior designers Mollo & Egan. Provision was made for an organ but none was ever installed. There was no stage.

The opening film was Robert Donat in “The Ghost Goes West” and the opening ceremony was attended by Charles Laughton who was born in the town.

After a fairly uneventful life it closed, unaltered, in October 1988 and lay derelict for 5 years.

It was then acquired for use as a two auditoria theatre. This required extensive alterations to the Grade II Listed building.

The compromise being that the exterior, foyers and cafe have been restored to the original. ‘Some’ of the plasterwork was rescued and has been relocated to the McCarthy Theatre (the former circle area) which still shows films projected from the original projection suite. The original seats were re-upholstered and new carpet was especially woven to the original ‘Odeon’ design.

The screen end of the building was virtually demolished to provide a purpose built state-of-the-art theatre-in-the-round. This opened in April 1996 with the premiere of ‘By Jeeves’ a collaboration by Sir Alan Ayckbourn and Sir Andrew Lloyd-Webber - which played to packed houses for its entire run. (Broadway had to wait until 2001 to see the show!)

The architect for the conversion was Harry Osborne of Osborne Christmas Associates and the scheme cost about £5 million.

It incorporates some leading new technology such as the stage lift and the wire mesh ceiling allowing lighting techies complete access in complete safety. It was the first such use in a U.K. theatre.

It is now a thriving theatre which premieres the plays of its Artistic Director and Playwright Sir Alan Ayckbourn.

The smaller 165 seat McCarthy Theatre still shows films regularly whilst the The Round (404 seats) is exclusively used for theatre and the occasional concert.

Recently (2001) the faiance tiles were given a clean and the exterior neon lighting restored - it looks magnificent by night now!

It is open almost throughout the year and is well worth a visit!

Whilst the Odeon could take a fortune during Scarborough’s short summer seasons by the ‘80s, such a large, single screen cinema just wasn’t feasible in the resort and any “summer profit” would be overtaken by mounting winter losses. The Rank Group were prepared to undertake a more expensive-than-normal, drop wall tripling to provide two small cinemas in the rear stalls while preserving the entire auditorium above and in front of the balcony with all its plasterwork, lighting coves and screen within the original proscenium. The two extra screens enabling three choices of film could have much reduced the winter losses but the Council wouldn’t allow any changes whatsoever and Rank had to cut their losses. This was the same council which, a few short years later, allowed the auditorium to be totally gutted in order for two small auditoria to be created within the shell. No amount of cleaned faience tiling and restored neon will ever compensate for the unforgivable loss of this impressive cinema. In the Odeon’s later years, it joined the Odeon, Leicester Square in being one of only two unsubdivided original Odeon theatres. Then there was one…

Although, with the exception of Muswell Hill (surrounded by a much larger catchment area) and York almost all of the triplings resulted in further sub-division or closure in the 1990’s – and Odeon have tried on several occasions to destroy the impact of MH and exited York. The large balcony and front stalls auditorium could not have survived in Scarborough and the mini’s in the rear stalls would have been small and unsatisfactory.

Though I completely agree that this was one of the finest of the Odeon interiors and a sad loss when it was converted.

And don’t start me on the local council ……!

Whilst I agree that minis resulting from typical tripling have seldom, if ever, created what we would consider satisfactory cinemas, they have usually proved their worth with additional revenue prolonging the “parent” cinema’s life, albeit, as you say, not indefinitely. There were no plans to extend the large circle forward at Scarborough or utilise the front stalls. There were thoughts, as long ago as the ‘60s, of creating a cinema within the cafe area (which by then had become the rather tired Showbar)and we’ll never know whether a screen count of four would have enabled the Odeon to survive longer. Jim Whittell, then M.D. of Rank Leisure Services, persuaded the Board to go in for an “especially sensitive” tripling as he loved the Scarborough Odeon and was determined to stem the winter losses. I was Scarborough’s assistant/relief manager in the late 'sixties and it was something of a culture shock to be controlling queues and putting the “House Full” boards out quite regularly up until mid September and then find staff outnumbering patrons on some out-of-season days. Of course, some pre-release films and a Thursday start helped when Sunday start was the norm at provincial, non-resort cinemas, not to mention the vagaries of the English summer weather! In 1980 when Rank announced the closure of Muswell Hill, my late friend/colleague and former M.H. manager, Steve Gaunt, although having taken over the Odeon, Holloway, threatened to chain himself to the front doors! Although, mercifully, in the event, that didn’t become necessary. I’m surprised M.H. has lasted this long with just three screens, it may have a large catchment area but it also has other cinemas not very far away. York? Well what can I say? With a multiplex within two miles of York and a three screen Picture House operation in the city centre, one might have thought the Council would have encouraged the refurbishment Odeon wanted to do at the time but, instead, ignorance and intransigence won the day and the Odeon was lost. As with Scarborough, who knows how long the rebranded cinema would have survived but it would have been given a fighting chance. It’s now a dire Reel and, having known the York Odeon for over fifty years and having trained there in my management days, one visit to the Reel was quite enough. Guess nothing lasts forever.

Criminal, absolutely criminal. And these are the same jokers that have just closed the Futurist!