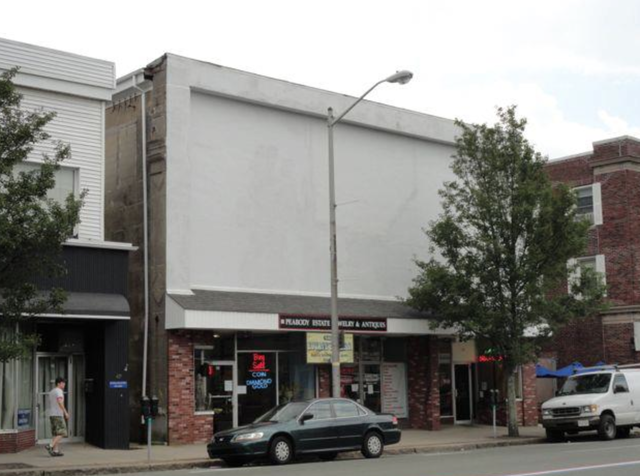 The Strand Theatre was the only movie theatre in downtown Peabody, a northern suburb of Boston. It had a balcony and an exceptionally handsome classical facade. It was apparently built sometime between 1910 and 1920. Any further information will be appreciated.

The Strand was included in the MGM Theatre Photograph and Report project. There is an external photo dated May 1941. The theatre was a free-standing building with a handsome facade. It had a glittering rectangular marquee with 3 sets of double doors below. Attraction was “The Sea Wolf” with Edward G. Robinson. The Report states that the Strand is on Main St. in Peabody, that it has been playing MGM films for over 10 years; that it’s over 15 years old and in Good condition, and has 672 orchestra seats and 327 balcony seats, total: 999 seats. There were no competing theatres in Peabody, and the 1940 population was 21,700.

In the 1942-43 edition of the Motion Picture Almanac, the Strand in Peabody is listed as part of the E.M. Loew circuit.

The Strand Theater building in downtown Peabody is still there but it now houses a storage facility and some other business. It is relatively easy to spot because the side of the building still shows fire escapes and the back of the building rises up sharply to where the stage must have been.

The Strand in Peabody is listed in the 1927 Film Daily Yearbook as having 700 seats and open daily.