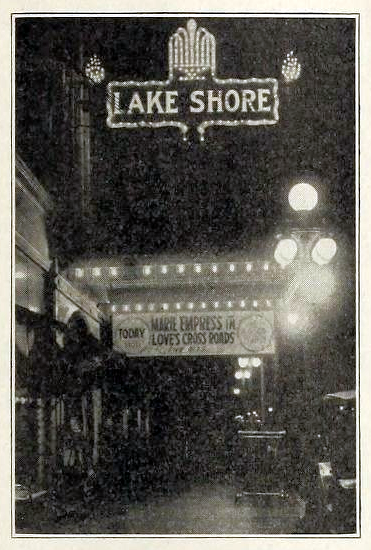 Opened in 1915, the 525-seat Lake Shore Theater, in Chicago’s Lake View neighborhood, was a small neighborhood house, operated by Balaban and Katz.

By the 1980’s, it had become faded and run-down and was given a facelift when it was taken over in the late-1980’s by the Cineplex-Odeon chain (which also operated the historic Biograph Theatre in Lincoln Park at that time).

On April 1, 1988 it was renamed the Broadway Cinema, because of its location on the corner of Broadway and Belmont Avenue.

The Broadway Cinema was last operated as a movie theater by the short-lived Meridian chain until its bankruptcy in 2000.

In 2002 the Broadway reopened, under its original name, the Lake Shore Theatre, as a venue for live performances, with an emphasis on comedy acts. Due to high running costs on the ageing building, the Lake Shore Theater was closed on April 10, 2010, but was re-opened in November 2011 as The Laugh Factory.

The crew of the WWII German U-boat U-505 was shown “Das Boot” in this theater, although many chose not to attend.

I lived & grew up, in this neighborhood (Belmont & Broadway) from 1945 to 1970. Attended Nettlehorst grade school. I saw many movies at the Lake Shore throughout that time period. Although small, it was a very neat, well kept theater, but without the ginger-bread, exterior had an exterior art-deco motif back then. Curved smoothed metal siding, colors were yellow & red. The front had a small independent 1-person ticket booth, now removed. A small door in the rear of the booth provided access and to the front theater doors behind. People could walk all the way around the booth, although narrow about 3-foot wide passage. Movie posters along the sides. Originally had greater seating, but I understand some seats were removed so as to enlarge the stage. The street had plenty of small shops. On the SE corner was a Wallgreens, later it became Rickeys Restaurant in the late 50s. Evergreen market started small and grew to encompass the NE corner, absorbing Duke The Florist. The area was rich in movie theaters, within walking distance to us kids in the 6 to 14 year range or so. They were the Essex (Sheridan & Pinegrove), Vogue (Broadway & Grace), Mode & Sheridan (Sheridan & Irving), Buckingham (Clark & Buckingham), Julian (Belmont & Wilton), Vic (Sheffield & Belmont), Century & Parkway (Diversey & Clark), Covent (Clark & Drummond). The Julian would not allow access if we were armed cap guns. We also took streetcars or our bikes to other theaters, Belmont, Biograph, Uptown, Rivera, Panthalon, Lakeside & many others. This neighborhood was very cosmopolitan. East of Broadway heavily Jewish & Catholic. West was mostly Catholic & Protestant. Sheffield & Clark was a Swedish (aprox 10%) neighborhood that extended all around, knew may kids with a Swedish last name, Larson, Swanson, Nelson etc. Many Swedish eateries. Winter time, all of us used the indoor swimming pool in the Swedish community center on Wilton just north of Belmont. They were very nice to all of the neighborhood kids. During that era, I attended, as a guest, most of the worship places, Catholic, Jewish & Protestant in the area.

Add to my last comment. The Lake Shore had a full marquee, full width & out to the curb. I assume that it is still the same one that is covered up.