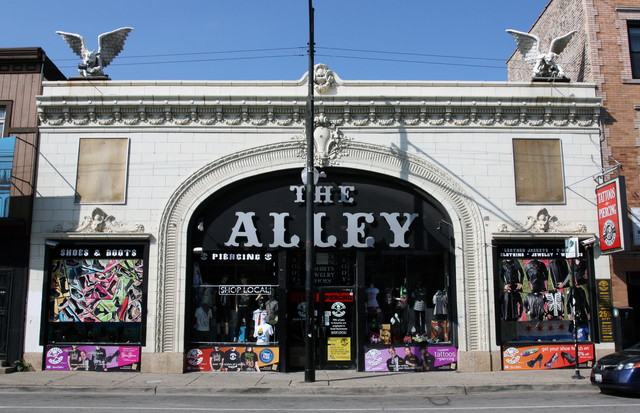 This Lake View neighborhood movie theatre, which opened in 1909 as the Garibaldi Theatre and closed in 1911. It was reopened and renamed Clermont Theatre by February 1914, sat around 625, and was located not far from the somewhat larger Buckingham Theatre, which was home to the popular Organic Theatre Company for much of the 1980’s and 1990’s (now located in suburban Evanston).

After closing as a movie house in 1945, the Clermont Theatre was converted to retail use. It became home to the Alley alternative shopping center, which closed January 19, 2016. The auditorium was demolished in January 2017, the facade remains.

The Alley building may be coming down in the future to make way for new development.

I see an ad from 1914 refers to this at the Clearmont Theatre. Not sure if this is a misspelling or the actual name of it.

Clermont Theater Company, Chicago, $10,000; to conduct amusement, motion picture and theater business. Incorporators, Paul G. Hensel, Fred L. Steers and Thomas A. Garibaldi. Dated December 13, 1913, so the theater must have opened in 1914. It disappears from listings around March, 1927.

The earliest Tribune ad I could find was Feb 18, 1914 which spelled it “Clearmont”. By Feb 25, this was corrected to Clermont, the spelling that remained used through 1927.

the store there closed for good yesterday and had a farewell, although there’s still some activity there today

They had a party yesterday, but do not close until tomorrow.

I’ve heard that Edgar Bergen (Charlie McCarthy’s dummy ;) ) was a projectionist here during the vaudeville era. Haven’t seen an independent confirmation of that anywhere, though.

Khnemu, I was by there recently and it’s still standing. The gargoyles are gone but otherwise it’s intact. I was at an alderman’s meeting and the developers said they considered saving the beautiful building but there was a fire here long ago. It damaged the framework so it’s unfit for building upon. As far as the facade, the language they used was that they hoped to save it but, with century-old construction, who knows.

The Clermont is currently being demolished. The front facade is still standing but I don’t know if it will survive the wrecker’s ball.

This weblog post, which features some splendid photos of the terra cotta detail of the Clermont’s facade, says that the facade is to be the only part of the building saved. A seven-story building will replace the theater itself.

The article says that the house opened in 1909 as the Garibaldi Theatre, closed in 1911, and reopened as the Clermont, which it remained until closing in 1945.