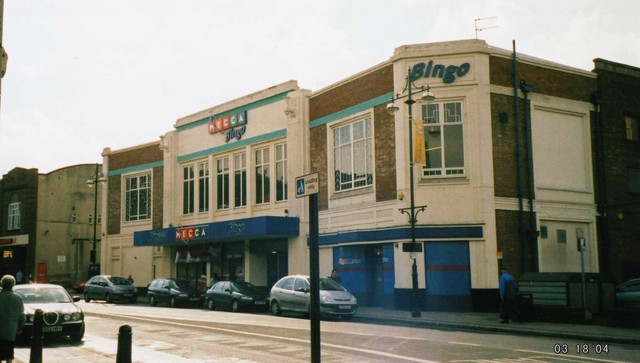 Opened 22 December 1934 as the Regal Cinema with Leslie Howard in “Girls Please”. Sandy Powell, the famous comedian attended opening night this 1,825 seat (1,097 stalls, 728 circle). It was designed by the Hull based architectural firm Messrs Blackmore & Sykes for local exhibitor Thomas Wade and was leased to the Lou Morris chain. The Regal Cinema was equipped with a Conacher 3Manual 8 unit theatre organ which was opened by Thomas Dando. There was a stage and three dressing rooms and a cafe/restaurant for the convenience if its patrons and the general public.

By 1937 it was operated by the London & Southern Super Cinemas Ltd. chain. The Regal Cinema was leased to the Odeon circuit in 1946 and was re-named Odeon. It was sold by the Rank Organisation to an independent operator in 1975 and renamed Scala Cinema, by 1981 using the circle only. Closed 23rd September 1983 with the film “Porky’s”.

Became a bingo hall initially named Ritz but now Mecca. On 20th February 2020 the building was put up for sale by auction at an asking price of £600,000+, but failed to sell, with the maximum reached £590,000. Mecca bingo continues in the building.