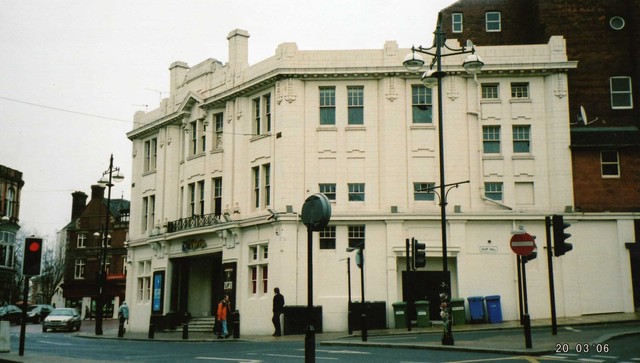 Possibly, in 2007, displaying the last remaining Essoldo sign in the UK (on the adjacent office Essoldo Chambers), this cinema opened as the Empire Theatre in 1913, designed by Chadwick and Watson of Leeds.

It was altered and adapted as a full time cinema in 1921, known as the Empire Super Kinema. It was acquired by Associated British Cinemas(ABC) chain in 1929, and they kept it for ten years before selling it to an independent. By this time it had 1,225 seats and two balconies. It was sold to the Essoldo chain in 1954 and renamed Essoldo the following year.

Passed to Classic Cinemas chain in 1972, it was modernised in 1974 when only the stalls were retained in the resulting 510 seat cinema. A second screen was added 1978 using the former gallery (top balcony), leaving just the circle unused. Screen 2 seated 314, at the same time screen 1 was reduced in size to 294 seats. Last operated by the Cannon Group, it was renamed Cannon in May 1988 but closed on 22 February 1990. It is now split as a nightclub and a snooker club.

The exterior survives pretty much from its original theatre days. It occupies a large corner site on the junction of Westgate and High Street. The foyer block is in white faïence tiles with the bulk of the auditorium and fly tower set well behind in brick. New entrances to the snooker and nightclub have been inserted on the side of the auditorium, whilst the foyer block has been separated and converted to other usage.

In the early 1960’s, when still called the Essoldo, one of Rotherham’s amateur operatic societies – The Steel, Peech & Tozer Operatic Society, cleaned all the backstage areas and redecorated the dressing rooms and produced ‘Carousel’ on the Essoldo stage, as they found the new Civic Theatre’s stage too small. I also recall the ‘Jimmy Clitheroe Show’ playing for a week at the Essoldo, bringing live theatre back to the building after many years as a cinema.