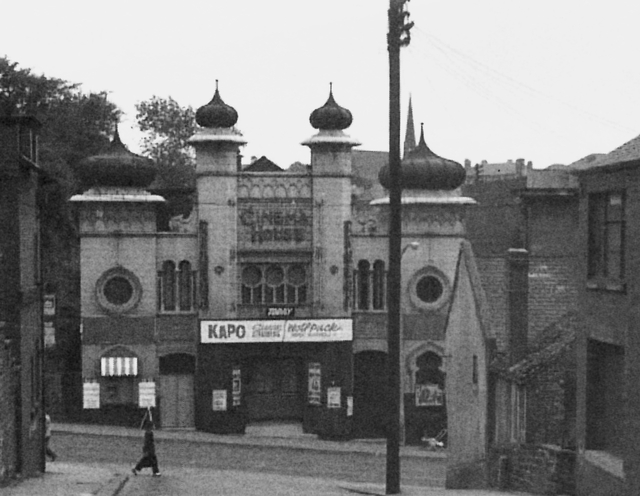 The Cinema House was opened on 9th March 1914 complete with cafe and ladies orchestra. The architect was W.G. Beck of Sheffield. The facade was conceived in a Moorish style surrounded by four Moorish domes, two octagonal and two square. The auditorium walls were paneled in oak and green with green seating and green Axminster carpet. The proscenium arch had an enriched cream moulding with black velvet drapes to the screen. Entrance to the auditorium was by the screen as the cinema was built ‘back to front’ so to speak with a steeped balcony area to the rear of the building. Proprietors were Rotherham (Cinema House) Ltd. being taken over by Cinema (Rotherham) & Electra Ltd. in 1931 when on 26th June the cinema was closed for the installation of sound, reopening on 26th August 1931.

In January 1939, the Cinema House was taken over by the Star Cinema Circuit of Leeds who installed a new screen and proscenium arch at the end of the month. In October 1951 it was closed once again for a complete modernisation which included extending the building at the rear to house a new projection suite and one hundred extra seats and did not reopen until 20th January 1952. The Cinema House remained open as a cinema for a further 12 years, closing on 1st June 1964 with Norman Wisdom in “Just My Luck” and Jeff Chandler in “War Arrow”.

It reopened almost immediately as a Star Bingo Club and in a further modernisation was given a new modern frontage, losing all its Moorish features. Later controllers were EMI Bingo, Coral Bingo and finally an independent bingo company. In around 2004, the building was badly damaged by fire and it remained closed & derelict in 2008 and looked in a very shabby condition. It had been demolished by September 2009.