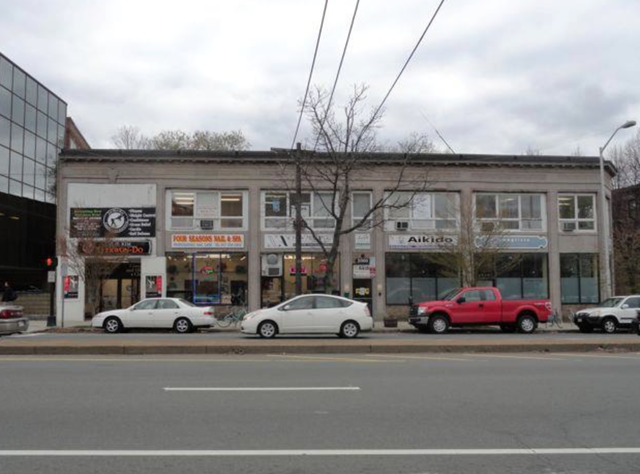 The Porter Square Theatre was a neighborhood house on Massachusetts Avenue in Cambridge. The building still exists and is now used as a martial arts school and a recording studio as well as other uses. Further information welcomed.

I just came back from a recording session at the studio at 2000 Mass. Ave. This building is, indeed, the former Porter Square Theatre. The studio manager confirmed it for me. He didn’t know too much about the full history, but he figured that his second-story recording space, or part of it, comprised the projectionist’s booth as well as the top of the balcony. He also has a promotional sign from the theatre, a hand-painted gem advertising a “Win This Radio!” contest (which, considering I was in the studio recording an original radio drama of mine, was pretty darn cool.)

When inside the recording space, which was not retrofit with drop ceilings, you can see the curve of the original vaulted ceiling and ex-fixtures where, presumably, house lights hung. I didn’t see any other remnants of the theatre anywhere else, except for outside door. The old theatre entrance is on the left side (south) of the building. It’s the entrance on the very very end of the building, going to one of the martial arts schools, and there are still two recessed windows which were obviously for lobby posters.

Judging from the entrance and the recording studio, the auditorium ran north-south the length of the building (parallel to Mass. Ave) with the screen at the north end. I wish I could get some time to explore the rest of the building myself, but there are too many tenants to ask permission from everyone. I was pretty happy to see the vaulted ceiling, though, and the advertising sign.

Cool. Did you get any photos?

Went back into the studio this week for another recording session, Ron, and I got a picture of the advertising sign for you. The vaulted ceiling really isn’t too much to get excited over, though; just a simple white curve in a room with lower light than my cameraphone liked.

The Cambridge Historical Commission lists the period of existence for the Porter Square Theatre as 1927 – 1967.

Some local folks have started publishing a semi-annual magazine called Growing Up in North Cambridge. One issue of this mentions that the Porter Square theatre was later renamed the Eliot before it closed. So I’ll ask CinemaTreasures to update this entry.

Before it closed entirely, the Eliot became a ballroom, as you can see from an ad at the lower-right corner of this page from MIT’s student newspaper, dated September 26, 1962.

Item in Boxoffice magazine, March 24, 1958 about the closing of the Eliot:
“Harold Markell, who has operated the Eliot Theatre in North Cambridge for many years has been forced to close the doors due to lack of patronage.”

My grandfather, Peter Raniere, was manager of the Porter Square Theater from the early 1930’s until the early 1950’s. When the original owner, Mr. Markell, died he left the theater to his son Harold who fired my grandfather. My grandfather was very close to the elder Markell and there was some rivalry. Harold lacked the business sense and skills and the theater quickly went down hill. Harold then decided to latch on the the emerging “rock and roll” craze and open a dance hall. That business did not flourish either. I have photos of my grandfather standing in front of the dish display in the theater. They used to give out “fine china” and housewives would flock to the movies to expand their collections. Prior to managing Porter Square, my grandfather was the manager of the Washington Theater in Boston. Amazingly, I still have the “take slips” for several days in the early 1930’s…362 patrons at .10 each saw Masquerade, a newsreel and another movie.

Hi, Nadine. Do you know when and why the name was changed from Porter Square to Eliot?

I grew up in North Cambridge and remember two neighborhood theatres very well. The Harvard Theatre on Mass. ave near Frank’s Steak House and the Eliot Theatre. I remember it was once the Porter Square Theatre and I believe the name was changed was priot to 1946 or so to the Eliot. I used to go into Arlington to the Capital, also on Mass ave. I visited often the Regent Theatre in Arlington Center. The University Theatre was in the heart of Harvard Square across from the entrance of the newspaper kiosk. All these theatres were just great places. I remember the Eliot changing over to a ballroom and there in lays the foundation of it’s decline. It drew trouble and people not from the immediate neighborhood of Porter Square. Where I lived was on the boundary of Cambridge,Arlington and Somerville. It was easy to walk the railroad tracks from Mass. Ave Cambridge side to Davis Square somerville and frequent that theatre as well. There was a drug store with a soda fountain on the very corner of the block that housed the Somerville theatre. I also live very close to the Teele Square theatre and it was considered dirty. One could smell the rest room naptha all during a movie. It was a turn off place for me personally.

I remember going to this theater (then the Eliot) at 8 years old. I think a ticket was 25 cents for kids in the afternoon. This would have been about 1952. I also remember the sets of dishes. I have been looking for the theater since I moved back to this area and walked by 2000 Mass Ave today and thought it might be the spot. Great to read about it here!