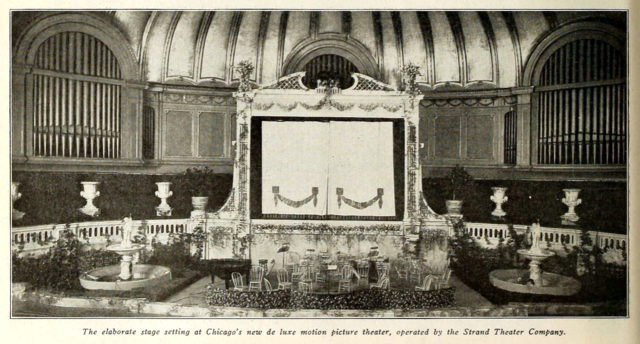 Chicago’s famed Orchestra Hall, designed by noted Chicago architect Daniel Burnham, and opened on December 14, 1904. It has been home to films intermittently in its long history, first from May-October 1915, and then May-September 1916 showing cinema concerts.

A similar pattern followed for several years, and at one point the building even sported an electric Paramount/Artcraft sign. Since then, the Orchestra Hall has seen movies on special occasions, and even now will occasionally accompany a silent film.

We were in Orchestra Hall endlessly as school kids. My grade school Ogden had a music program that included regular, daytime concert trips to Orchestra Hall. At least 2-4 times a school year.

One conductor I remember well was Dave Mazur. A girl in our class was an accomplished violinist in our school band, Debbie Hoffman. And her father Irwin Hoffman was at that time first violin at the CSO. As I recall Hoffman briefly took over conductor duties when Mazur’s predecessor, who’d been there a long time, retired or moved on. Might have been George Solti, but I think it was before him. And I could have the chronology wrong.
We definately had the same CSO & conductors as the evening performances had.

The stage was huge as one could imagine with possible dumb waiters that brought the grand piano up when needed. Also 3 giant tubular sections above some choral group areas, all above the stage. Not sure if the tubes were acoustically functional, or just decorative. Either way the acoustics are always perfect at Orchestra Hall.
Nice comfy, deep red velvety seats too.

The last thing I saw there was a St. Patrick’s Day reading by John Malkovich a few years back. Which included a Western Illinois based orchestra surprisingly featuring our percussionist from grade school, after over 35 years. And now on the same stage we used to watch.
Plus a prominent solo Irish dancer who danced on a wood platform at certain points in the story.

The interior seems to the eye to have jsut as much seating area as there is stage area. As the main floor is kind of short, with several levels of balconies directly over the main floor.
Not really staggered back as much as you would expect.

The CSO will be performing live to a showing of the classic Chaplin film “Modern Times”, on March 6th 2009 at Orchestra Hall.

The Orchestra Hall was opened on May 1st 1915 as a moving picture theatre after being leased and refitted throughout by the Strand Theatre Company of Chicago.

Movies at Orchestra Hall may have started in August 1912, with the second convention of the Motion Picture Exhibitors' League of America. In addition to films, the convention also showed motion pictures of the exhibitors taken earlier that afternoon at the Selig plant. The exhibition also rotated projectors, so a comparison could be made of the capabilities of different projectors. Accompaniment was not by symphony, but a Wurlitzer Orchestrion.

This must have been one of the first deluxe exhibitions in Chicago.

And in May 1914, Alfred Hamburger and Lubliner & Trinz competed for the lease, with L&T winning. Pictures started showing July 1 for 15 and 25 cents.

Lubliner & Trinz did not win the next year, with the Strand Theater company taking over for the summer season. Although it was named and patterned after New York’s pioneering Strand, the Chicago company was unrelated. Motography noted, “The men behind the Strand Theater Company, strange to say, are almost without experience in the film world. E. C. Devine, the president, having for years been engaged in the automobile business on Michigan avenue, Chicago; J. S. Inderrieden, the vice-president, being a wealthy commission man with offices in the commission district on River street, and A. J. Pardridge, the treasurer, being one of Chicago’s best known real estate dealers and heavily interested in one of the city’s largest department stores.”

Devine and Pardridge took the lead, hiring a manager, E. Q. Cordner, with a long experience in New York theatre, and designer Earl H. Reid. The addition of an elaborate stage setting with a 25 piece orchestra brought the first public deluxe theater experience to Chicago (showing Paramount exclusively), over 2 years before the purpose-built Central Park. Prices ranged from 10-50 cents for evenings, and Orchestra Hall did much to make motion pictures respectable to a higher-class audience in Chicago. Following this successful summer, the Strand company moved to its own theater, the former panorama building.

Summer 1916 brought new management by Wessels and Voegli (orchestra managers), showing VLSE pictures in their new “cinema-concert” format, with real accompaniment to the pictures onscreen, including film of orchestra conductor Arthur Dunham. The projection booth was located in a box seat. Manager was H.W. Hill. Seating capacity was 2577 at the time. It was declared a “picture palace” in Motion Picture News.

For summer 1918, the theater was leased to show Paramount/Artcraft pictures. A new curved screen was installed to remove distortion, with a visiting D.W. Griffith declaring it the best projection he had seen. This arrangement continued through the 1920 season. First National pictures took over in 1921, returning to Paramount in August. It was closed for the 1922 season, as Paramount made a deal with the Jones, Linick, and Schaefer circuit.

In May 1923, Martin Henoch of the Stratford Theater leased Orchestra Hall for the summer, opening with “Safety Last”. The same film played for eighteen weeks straight – 1,260 shows and 300,000 patrons.

In 1924, Lubliner & Trinz took over summer management. In 1926, they started a revival policy, showing ‘old’ movies from years past. After a bad 1927 season, the Hall only opened briefly in 1928. With the coming of talkies, Orchestra Hall was no longer appropriate.

Movies returned in Summer 1933 to capitalize on the nearby Century of Progress, leased by Aaron Jones, reviving Jones, Linick, and Schaefer along with the Woods, State-Lake, Randolph, and Rialto. This run for the duration of the World’s Fair would be the last regular exhibition run at Orchestra Hall until August 1942, showing “No Greater Sin”.