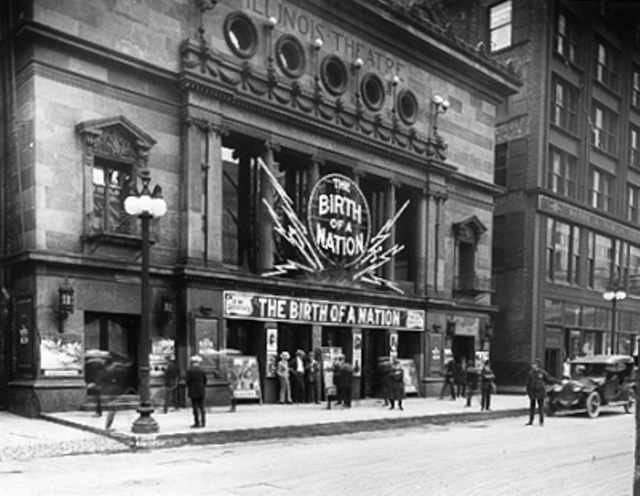 The Illinois Theatre opened its doors on October 15, 1900, built for theatrical producer and manager Charles Frohman. It was designed by Benjamin Howard Marshall, who later, with partner Charles Eli Fox, would go on to design such Chicago landmarks as the Drake Hotel and the Blackstone Theatre and Blackstone Hotel.

The Illinois Theatre, which cost over a quarter million dollars to erect, was a jewel of Beaux-Arts architecture, inspired by the "White City" of the Columbian Exposition in Chicago almost a decade earlier, and sat almost 1,250.

The three-story facade was faced in limestone, with a row of Ionic columns above the main entrance. Above the colonade, five porthole-like windows ringed by terra-cotta wreathes each had a lion’s head, also of terra cotta, below them. The theater’s name was inscribed just below the cornice in large letters.

For many years, both the Illinois Theatre and the Princess Theatre, both downtown, were two of Chicago’s most well-known legitimate theaters, their stages hosting some of the most celebrated names of early 20th century theater.

However, by the teens, the Illinois Theatre had become the Chicago home of the Ziegfeld Follies, and presented both live stage reviews as well as motion pictures, before turning entirely to movies in the 1920’s.

The Illinois Theatre was shuttered during the Depression, and never reopened, being demolished in 1936 for a parking lot, the same fate the Princess Theatre would face a few years later.

Here is a photo from the Library of Congres

Here is a postcard view.

Here is part of an article in the Fitchburg Sentinel, dated 3/7/36:

CHICAGO, March 6-For the seoond time in recent years a theater is being razed to make way for a parking lot. This time it’s the Illinois theater, home of the “Follies” and the big musical extravaganzas of a decade ago The old Cort theater in the heart of the Rialto district was effaced to make room for an auto parking lot several years ago.

Dimmed lights for the Illinois Theater will mean $21,000 rental for the site it now occupies to be paid the liquidating trustees by the Loop Auto Parks, Inc. This was disclosed yesterday when the final steps in the leasing of the historic property were concluded.

Just curious if anyone knows whether this theatre fronted on Jackson or Wabash? And if you know which corner of Jackson and Wabash referred to in the address, that would be helpful too. Thanks!

Here is another version of the postcard at the top of the page:
http://tinyurl.com/otql2m

Here is a Shorpy link with the above posted Library of Congress 1907 photo. Click “view full size” for greater detail.