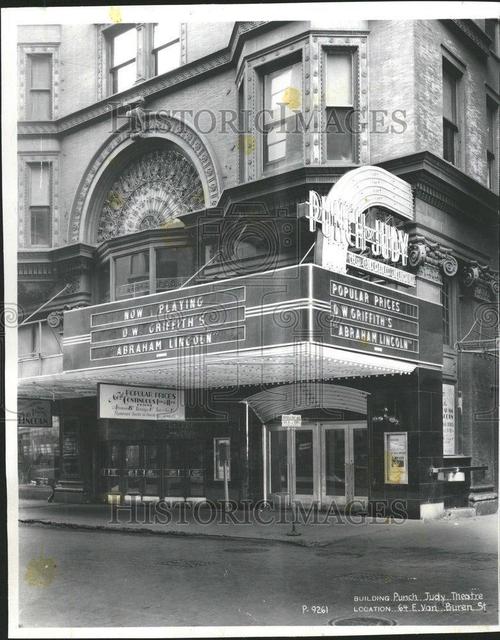 In 1930 it was taken over by Louis Machat and remodeled by architect Eugene Fuhrer with a reduced seating capacity of 354. It became a movie house for the first time, as the Punch & Judy Theatre, opening on September 18, 1930 with Walter Houston in “Abraham Lincoln”. In about a year, it returned to the Central Theatre name and live theatre, but from March 22, 1935 it was renamed yet again, as the Sonotone Theatre. It would remain a movie house and was renamed Studio Theatre from July 1, 1940. It became the Ziegfeld Theatre from November 24, 1950, and finally the Capri Cinema on July 5, 1958, which it remained for the rest of its life, finally running adult films to end the once-illustrious theatre’s career.

It’s in the Photos section…

A two page article about the Punch and Judy Theatre, complete with floor plans, followed by four pages of photos, appeared in the October 25, 1930, issue of Exhibitors Herald-World. It can be seen online at the Internet Archive (click on the + sign in the tool bar at the bottom to enlarge pages.)

March 22nd, 1935 grand opening ad as Sonotone in the photo section. It was the first theatre in the world be equipped for the hard of hearing according to the ad.

The grand opening to the public was on November 21st, 1950, with a gala performance the night before for the benefit of the scholarship fund of the Chicago Musical College. See ad uploaded to the photo section.