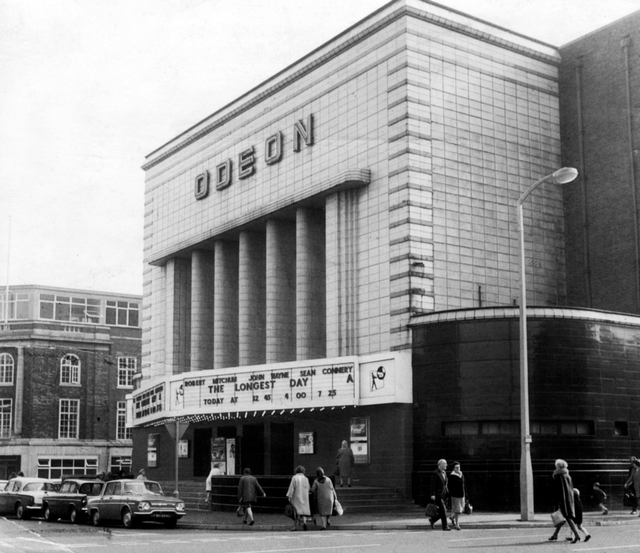 The Odeon Bolton opened on Saturday 21 August 1937 with Conrad Veidt in “Dark Journey”. It was located on a fine corner site in the centre of Bolton, Lancashire, on the corner of Ashburner Street and Black Horse Street. It occupied the whole of the island site and was, at 2,534 (936 of which were in the balcony), the largest Odeon at the time.

The architects were W. Calder Robson and Harry Weedon, who provided the Odeon Theatres Ltd. circuit with a fine angular cinema with fluted walls and a stepped ceiling. The proscenium opening was wide and on either side were decorative honeycomb grilles. The whole of the auditorium was designed to reflect the coloured lighting that gave the cinema its atmosphere, rather than the decorative plasterwork. There was a cafe and also a Compton 3Manual/8Ranks organ with illuminated console which rose from the centre of the pit in front of the stage. This was opened by organist Harry Croft.

The exterior was massive with the facade covered in cream faiance from 1st floor to top, trimmed with green tiles, and black tiles at ground floor level. This was enhanced at night by the neon lighting. There were six tall windows in the centre and above, again neon lit, large “Odeon” lettering. It had cost £49,500 to build, significantly more than most other Odeons of the time.

The Odeon was a highly successful theatre, but it was soon eclipsed in size within the circuit when the Odeon Bradford opened in 1938 and Blackpool in 1939.

It was modernised in the 1960’s and then in 1972 it was tripled in the standard Odeon drop wall style with two minis (seating 148 each) under the balcony and the circle retaining the original screen, projection suite and appearance of the cinema. All three closed on 8 January 1983 with “Mary Poppins” in Screen 1, “A Midsummer Night’s Sex Comedy” & “Hooper” in Screen 2 and “Flash Gordon” and “Battle Beyond the Stars” in Screen 3. The auditorium was restored to one unit again and converted into a Top Rank Bingo Club.

Later re-named Mecca Bingo it closed in November 2004 and after laying empty for a couple of years, it was demolished in February 2007 with proposals be replaced by a mixed-use office space, residential accommodation and a hotel.

The Odeon photographed in December 1970 when still a single screen, playing the Rank Release:
View link

A photograph from its final years as a Mecca Bingo Club:
View link

Does anyone have any internal pictures from its last years of operation as a bingo hall?

Here’s my short video tribute shot in February 2007 before the major demolition phase.

That was a huge building. Is it me or does “The Aristocats” always seem to be on the marquees of these places?

Nice pic. An old Ford Anglia I believe parked in the middle. With the opposite angled rear window. Like some early `60’s American Mercury’s had.

Here’s a photograph of people on the Odeon steps, taken only a few weeks after it first opened