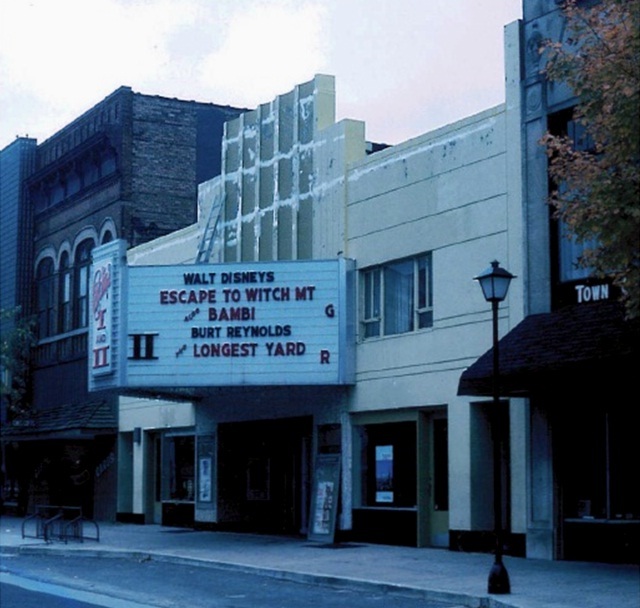 Hendersonville’s small Atmospheric style Rex Theatre was opened on March 6, 1933 with George Arlis in “The King’s Vacation”. It was renamed Carolina Theatre and destroyed by a fire on May 10, 1940. (it has its own page on Cinema Treasures).

It was rebuilt and reopened in May 1941 and was operated by Paramount Pictures Inc. through their subsidairy H.F. Kincey in the early-1940’s. It had seating provided for 1,000.

Later remodeled in the Art Deco style, the seating capacity was reduced to 863. It was twinned in the mid-1970’s. It has been replaced by a bank building.

first movie to play the reopened CAROLINA was “ROAD TO ZANZIBAR” with a DONALD DUCK cartoon and News.Opening was a 6:30 pm.

More Movies that Played at the CAROLINA One and Two Theatres.

CAROLINA 2 Penthouse is finishing up a long run on"ANIMAL HOUSE" with “BLAZING SADDLES” returning for limited Engagement Dec 2 1978. A midnight show of “THINK DIRTY” with Marty Feldman will play over the weekend,Friday and Saturday.

Carolina Two in the PENTHOUSE has Held over if you can believe it the “SWARM”.

CAROLINA ONE has “THE BLACK HOLE” A Disney Sci-fi with special Admission this attraction only Adults $3.00 a seat.Under 12 $1.25 must be Disney film rentals.

CAROLINA TWO the PENTHOUSE has “10”.

CAROLINA ONE has “ SCAVENGER HUNT” playing.

CAROLINA TWO the PENTHOUSE has “STARTING OVER” .

CAROLINA TWO the PENTHOUSE has “GUYANA CULT OF THE DAMNED”.

CAROLINA ONE is showing “SLEEPING BEAUTY” .

CAROLINA TWO the Penthouse has “STAR TREK the Motion Picture” what a huge event flick to play in such a small theatre with a tiny screen compared downstairs to the CaroLina One.

Carolina One has “JAWS 2”.this must be a re-release.Because I know it was a summer not winter film.

CAROLINA TWO the PENTHOUSE has “THE JERK”.

CAROLINA ONE has “COAL MINER’S DAUGHTER” Held over.In that neck of the woods I can understand the Country Music connection.

CAROLINA TWO the PENTHOUSE is showing “THE FOG”

CAROLINA TWO the PENTHOUSE has one of Steve MCQueen’s Final films “TOM HORN”.Rated R one of the few R rated Flicks he would make.

My mom worked at the Carolina Theater in the 1950’s in the box office. Ted Reed (Reid)I think that was his name, was the manager. I remember seeing Peter Pan and a John Wayne western when I was a little girl. I remember the audience laughing out loud when I declared in my child like voice, “Look mommy, they’re wearing their jommies” (my word for pj’s)in the western movie.

I remember the flashing lights of the marque, the curtains over the double set of entrance doors, the thick dark carpet, concession stand with all the candy soft drinks and popcorn and the long stair case to the ladies room, which had several couches and chairs in a lounge area before entering the restrooms. The door to the office was in the lounge area. I was always fascinated with the lighting fixtures on the walls in the auditorium. It was a beautiful theater back then. To bad it couldn’t have been saved.

great story, yep. sorry a stinking bank building just had to go there,i did get quite a few one sheets out of that old theatre….

Was hoping for new info and history on the Theatre,but my lazy cousin hasn’t lifted a finger yet….He ran the place for years.was suppose interview bookers and old employees like Andrew’s grandmother!

FRANK JONES a well known film booker of this and many theatres in the area I am told passed away a few weeks ago in late March 2015..

The second Carolina Theatre opened in May of 1941 replacing the seven-year old original Carolina Theater that had burned one year prior on May 10, 1940 while undergoing a renovation. This location is also was where the city’s second Rex Theater was that burned down on June 14, 1932.