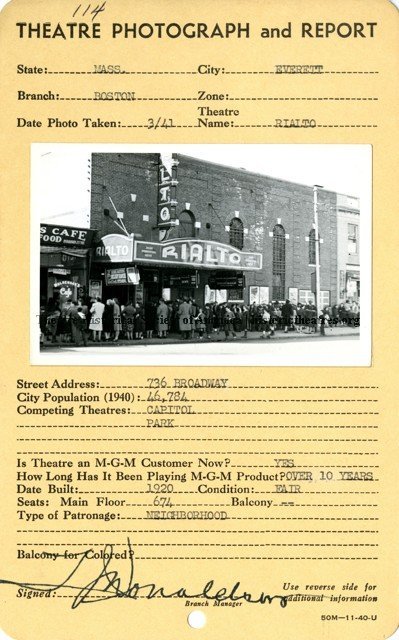 The MGM Theatre Photograph and Report form for the Rialto in Everett has an exterior photo dated March 1941. The theatre had an impressive brick wall, 2-plus stories high with 5 bays seperated by pilasters, each bay having a tall arched window. The entrance was at the left end. There was a rectangular marquee with vertical blade sign above. In the photo, there is a huge crowd of people, mostly women. I assume they are waiting to buy tickets for a matinee. The Report states that the Rialto has been a MGM customer for over 10 years; that it was built about 1920, is in Fair condition, and has 674 seats. It’s listed in the 1942-43 Motion Picture Almanac as being part of Charles Morse theatres of Boston.

To Ron…..My recollection of the Rialto only goes back TO THE 1950s
I am not familiar with Charles Morse theatres. In the 1950s the theatre was operated by a gentleman named Bob Rappa. At that time it was a second run theatre located in Glendale Square. It was struggling to survive. It had two distinct disadvantages. It never installed Cinemascope so it was limited to showing “flat” films. Also it did not have a sloped floor…..It closed in the late fifties. If memory serves me correct I believe it survived the Capitol…..After it closed the building became a bowling alley.
I dont know what is there now. Sam S

Believe theatre was managed by Jed Prouty in 1950 or thereabouts.Gave out dishes on Wednesday night and also had an occasional old vaudeville act to try to sell tickets. Not much helped as this was the start of the television era and the closing of the small town theatres.

The Park and the Rialto, both in Everett, played the same show in both theatres as advertised in the Everett Gazett on November 22, 1929.

The Rialto is listed in the 1927 Film Daily Yearbook as having 750 seats. They have 5 movie theaters listed for Everett: the Capitol, the Modern, the Broadway (850 seats), the Rialto, and the Strand (800) seats. I don’t know how acccurate the list is.