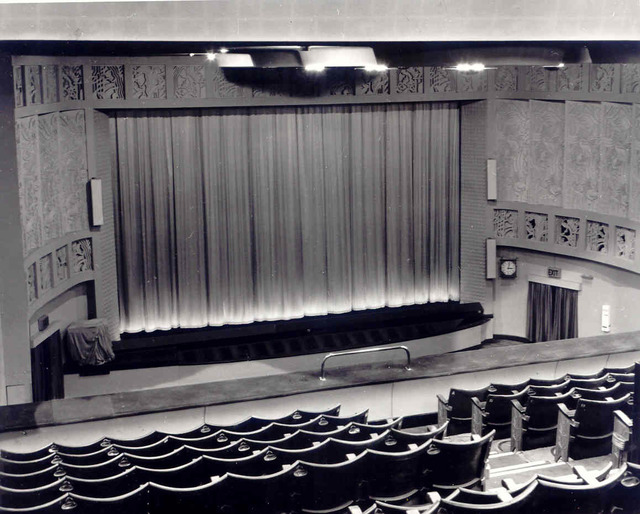 The 1,200-seat Ritz Cinema had an Art Deco style interior, designed by interior designers Mollo & Egan. It opened on 22nd November 1937 and was operated by Lou Morris. It became part of the Mayfair Circuit and was taken over by Associated British Cinemas(ABC) from 30th August 1938 being renamed Majestic Cinema.

It was taken over by Star Cinemas in June 1969 and began a period of film and part time bingo. ABC took control again from March 1975 and it returned to full time cinema use, but they closed the cinema on 3rd December 1977. It was taken over by an independent operator and re-opened on 29th October 1978 and was twinned in 1982 with the two screens seating 500 in the former stalls and 200 in the former circle.

I have many fond and nostalgic memories of the ABC (Majestic) Bridgnorth being appointed chief projectionist there in 1967 and taking over from the previous chief Bert Bennett (see photograph). Bert, who was a cockney, had been at the Majestic since the early days of the war and knew the building and it’s foibles inside out. The cinema was unique in as much as it had two diesel engine powered DC generators for all of its auditorium and stage lighting, plenum, extractor ,boiler pump, tabs and masking motors as well as supplying power for the projector arc lamps and secondary lighting. Bert used to run them months about, the idle unit undergoing maintenance during it’s month off. By the time that I arrived the diesel engines had been replaced by two three phase motors and they were used to drive the DC generators and were still in use when ABC closed the cinema in the late 1970’s.

The projection room was very spacious and housed the usual ABC set up of Ross GC3 projectors, RCA sound and Peerless carbon arc lamps,along with slide projector. The spotlight had been removed by 1967. There were separate rewind, staff and battery rooms along with washing and toilet facilities all within the suite.

Staff at the time from my memory were second projectionist Fred Rowley and third projectionist Tommy Watkins. Our manager in 1967 was Mr.Colin Hay who I had met during my time at the ABC Cine-Bowl in Hanley. He did move on to ABC Harrogate I believe. His successor was Mr Alan John who stayed for several years before leaving the business. Three ladies who would be well known to all patrons of the Majestic were Mrs Jessie Ping who worked as cashier and Miss Bill, the circle usherette and another usherette called Bett. There were others, Jack the handyman and the cleaning ladies whose names now escape me plus other staff who came and went.

We generally played Sunday for 1 day, Mon Tue Wed, Thu Fri evenings from 5.00pm & Sat am minors then continuous from around 1.30pm.

During early 1969 bingo was introduced to the Majestic by ABC on three nights per week (Tue Wed & Sat) however the cinema was soon acquired by the Star group and they spent a lot of money on refurbishing the auditorium and installing an oil fired boiler. Saturday late night shows were introduced after the Bingo sessions, commencing at around 11.00pm and running through till around 2.00am. Saturday was quite a long day!!!

“The End” came in 1977 and it was a very sad time for all of us who had kept THE MAJESTIC alive. It was great to see that it was subsequently reopened and that since that reopening it has kept the movie flag flying for Bridgnorth.

Well done to everyone concerned!!