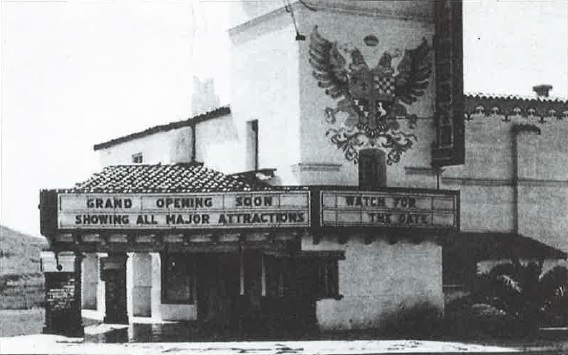 Opened May 12, 1938, the Miramar Theatre also has a bowling alley located at its rear (built and opened in 1946), with an entrance at 150 W. Avenida Pico. The theatre is dominated by a 44 feet high tower over its entrance. The Miramar Theatre was closed in 1992. It is in danger of being demolished following its sale to a local developer.

The new owner has said that some of the theatre’s key architectural elements may be saved, including its Spanish Colonial style tower.

Despite those assertions, preservationists doubt anything will be left of the 64-year-old theatre.

Even if some of the original elements are saved, the importance of the Miramar Theatre would be lost and the building would never be added to the National Register of Historic Places.

The Miramar Theatre is currently on the city’s list of historic properties and the space is now being eyed for restaurant, retail, or office space, or possibly for senior housing.

I cant access the article. Could you please cut and paste it here?

Not in good shape at all. Some homeless people are living on the property. I will post some photos later.

i was raised in san clemente and went to the miramar all the time.i saw surf films, rock bands,midnite movies and regular movies.it was a great theatre in its time.the building that backs up to it used to be the bowling alley but that was closed in the 50’s i think. and there was aorange julius on the side facing coast highway in the 60’s that turned into a surf shop in the 70’s and an arcade in the 80’s. http://tinyurl.com/4rd9rk in the picture the property on the left was sebastians playhouse but in the 30’s it was a casino so that might be the casino theatre mentioned in a earlier post.the miramar closed when multiplexs opened.movie distributors wanted new releases to go to the multiplexs first and by the time the miramar could get them they were already a couple of months old.plus parking was an issue.without a dedicated parking lot you had to park in the alley or on the side of the road,not a problem in a small beach town of the 60’s and 70’s,but a problem in a congesttedtourist trap of the 80’s and 90’s

From the January 29, 1938, issue of Boxoffice Magazine: “Construction on the Pacific States Theatres new San Clemente Theatre is being rushed for the February 11 opening set by Mike and Abe Gore, owners of the house.”

Can you point me to where you found the information or maybe even scan and send it to me?

Raad: Some old issues of Boxoffice are available online at Issuu.com. I find it easier to search within them by using Google’s Advanced Search “Search within site or domain” feature.

The City is demanding that the owner at least paint the exterior or else the city will arrange it and bill the owner for the cost: View link

Apparently, the Miramar is in the process of being sold yet again. LAB Holdings, owners of the historic Casino San Clemente ballroom, have announced plans to renovate the theatre and neighboring bowling alley, for use as a performing arts center and restaurant, once the sale is complete.

I have been looking into the possible changing of the building (keeping the exterior the same of course) into a dance club, in the Old San Clemente Bowling Alley, and the Miramar Theater into an office building or recording studio. Does any one have the present day floor plans of the two buildings? Please post a link. Thanks!