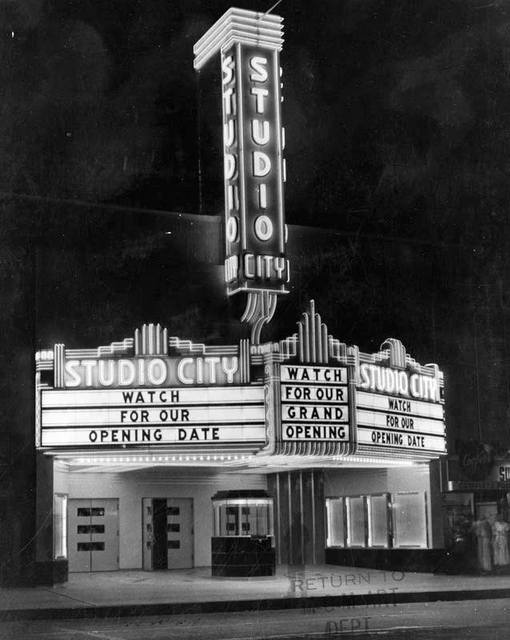 The Studio City Theatre was opened June 18, 1938 with Charles Boyer in “Mayerling” & Gordon Oliver in “The Marines Are Here”. It was due to open with Clark Gable in “Test Pilot” & Mickey Rooney in “Judge Hardy’s Children”. It was an independently operated theatre which even before it opened was involved in an Anti-Trust suit with Fox West Coast Theatres over film availability. It was soon taken over by Fox West Coast Theatres. It was closed in February 1991. is still around, but its days as a popular neighborhood movie house are gone.

Currently, a bookstore is housed within the building.

Fortunately, the old ticket booth lives on (to advertise books) and enough of the original facade and marquee remains to remind visitors what was once here.

The original terrazo remains welcoming customers to the store.

The Studio City Theatre shares a similar fate to the La Reina Theatre down the road on Ventura Boulevard. Both are now retail stores.

Very nice photos,was just wondering is the auditorium still there I did not read about in it any of the posts.

Yes, the auditorium is still there. Once you walk in the front doors, you are in the store and can see the auditorium. The lobby is missing.

I hate to ask a dumb question William but how can the Lobby be missing? Just wondering.The Lobby is most of the time between the Entrance and the auditorium,I know that this is a bookstore now.

I was watching the “Dragnet 1968” box set and in the first episode, there’s a great shot of Friday and Gannon pulling up in front of the Studio City theater (although Friday’s voice over says the theater is at Western and Olympic!). Dr. Zhivago is playing, according to the marquee.

Later in the episode, they also drive past the Oriental Theater on Sunset Blvd.

To William and tlsloews, the lobby is not “missing.” It’s simply with the remodeling necessary to turn the theater into a store, that space is now the least recognizable.

Don S, I said missing as the way it looked as a movie theatre the last time I saw a film there. Missing was the wrong word to use.

Historic photo of the Studio City theater is here:

Recent piece on the book store. Copy and paste to view.