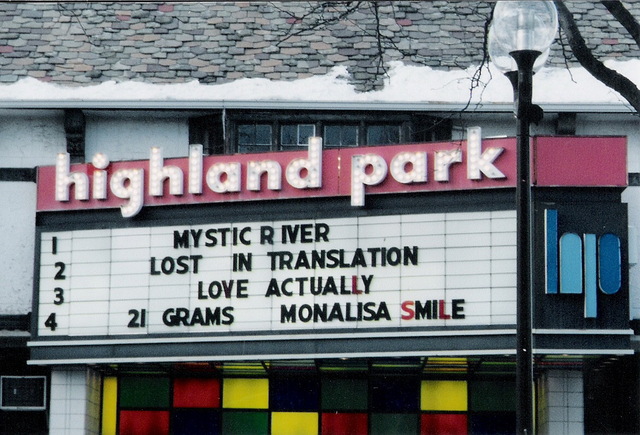 The most striking feature of the theater is its odd blocky marquee and the strange color blocks which decorate the entrance. Definitely a mix of styles.

Upon opening, the Alcyon was operated by Louis Laemmle, brother of Carl Laemmle, founder of Universal Pictures, who had a small circuit. In 1932, it was operated by Johnny Jones of Jones, Linick, and Shaefer, then in 1933 by the Orchard Theatre Company, before going back to William Pearl

The online auction of the theatre’s equipment and seating is beginning. After the auction is completed, the theatre will be demolished. Article in Chicago Tribune: http://www.chicagotribune.com/suburbs/highland-park/news/

It’s a shame to see it go. But it gets more and more difficult to run a movie theater every year. Renovations with the best of intentions also don’t always work out so well (Skokie Theater for example).

I just hope the new development is not a monstrosity with no respect downtown Highland Park’s character. They put in a new residential building in downtown Wilmette a couple years ago, on the site of an old Ford Dealer. Not only is it taller than any other building nearby, but the building style kind of looks like it belongs in a theme park. All in all is sticks out like a sore thumb.

I agree, LTS. I spoke last summer to Willis Johnson, owner of Classic Cinemas who saved a good number of theaters in the Western Suburbs, and basically he said the primary factor that sealed the HPT’s fate was when the city allowed Landmark to build its multiscreen theater practically next door at Renaissance Place. Too many screens in too small a geography. Meanwhile, Alcyon Foundation could not generate sufficient interest in the community in having and preserving a vintage theater. Their communication efforts were not helped by the fact that the theater’s historic architecture and charm had been totally compromised and papered over decades prior, so that hardly anyone could muster any sentiment for the building. The weird chapter of the theater being owned and run briefly by the City is fun to discuss but not really relevant. (Surely if the City cared, some improvements to meet fire code could have kept it open.) The other factors make up the typical recipe for losing an old theater, so far as I can see.

Such a shame it was not saved. It might have made a good performing arts venue.

Considering all the promises the city made to Apple Tree Theater, none of where were kept, who would trust the city to do anything for the arts? (This is now the fourth movie theater to be demolished in Highland Park. Such a good track record!)

November 3 – Not only is the theater gone but they are already starting on its replacement building.

Article with final photos of the place before it was demolished. https://jonrev.com/2018/06/10/highland-park-theater/