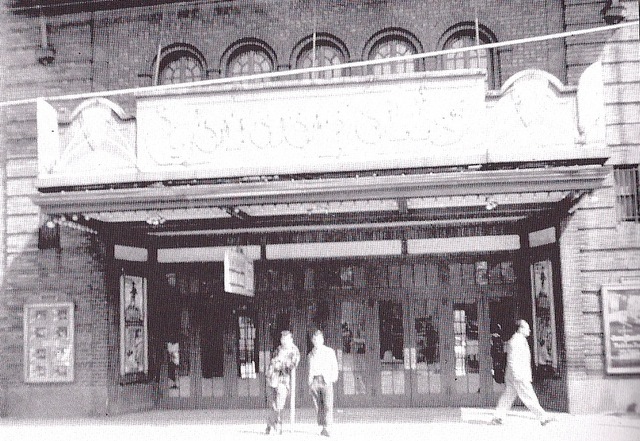 It’s hard to be sure in this case if we’re talking about one and the same Coraopolis Theatre. (Sometimes when a theater is demolished, another by the same name turns up elsewhere in the same community.)

The one I located in research was at 1015 Fifth Avenue in Coraopolis, a borough west of Pittsburgh but within Allegheny County. But it was only a 715-seater.

By 1983 it had been demolished. The property was being used as a surface parking lot. This address no longer appears on the county real estate assessment website, which could mean the property is owned by someone who has several consecutive properties to the left or to the right of it.

Ed, you are correct, as this was my childhood hometown theatre. There was another theatre in town at what became the Star Shoe Store on Mill Street and just around the corner. However, I have no recollection of it other than it was closed, likely after WWII or at the latest, in the early 50’s. The Cory theatre, (Cory, being the borough’s nickname,) was active until the very early 70’s when it closed. If memory serves, several years passed until it was acquired by the borough, razed to become the town’s first city parking lot. A lot of fond memories going to a Saturday matinee, to see a double feature and sitting through the first one again. Especially when there were such classics as The Blob, The Fly and Creature From The Black Lagoon.

This theatre was run by, either two brothers or partners, older balding gentlemen, who if you weren’t a smart alec and didn’t try too often, would let you in to “find your friend,” knowing full-well that this was only ‘sneaking-in.’ I don’t recall ever seeing someone thrown out for such a ploy.

The booth was different too, popping out from the back wall of the single floor auditorium and accessed via an almost straight-up vertical, steep set of stairs. A lot of good memories created here, including the most important. Once when home on leave from the service, sometime during the mid 60’s, I was walking past this theatre with some friends and commenting that maybe I’d become a projectionist and when out, I’d work right there at the Cory. That never happened, not there, but elsewhere, what a time it’s been.

Two other theatres in Coraopolis, PA listed in 1950 were the Fifth Avenue Theatre, 1032 Fifth Avenue with 340 seats and the Lyric Theatre, Mill Street with 350 seats.

Thanks, guys. I’ve seldom had occasion to visit Downtown Coraopolis, but I had an uncle, now deceased, who maintained his accounting office there until he was in his 80s. His second-floor office was on a main street and was near a theater with a traditional marquee, which was still there in the 1980s, I believe. No idea what the street was. Maybe this was the 1970s. It seemed to me it might have been the last moviehouse of its kind still standing (if not functioning) in town.

Anyone have any photos of either of these?

This item from the May 3, 1919, issue of The Moving Picture World is most likely about the Coraopolis Theatre:

“William R. Wheat, Jr., exhibitor of Sewickley, has purchased a site in Fifth avenue, Coraopolis, on which he will erect a photoplay house with a seating capacity of 1,000, to cost in the neighborhood of $75,000. Architects are now preparing the plans, and work on the structure will be commenced shortly. The decorations, lighting effects and ventilation system will be of the very latest types.”An advertisement in the May 7, 1921, issue of The Moving Picture World featured a letter from William Wheat of the Coraopolis Theatre:

“We have had a Twin Unit Hallberg Generator installed in our theatre for some time.

“Our throw is 140 ft., and our screen is 12 x 16. We find our picture is perfect and have a beautiful light at this distance.

“We cannot speak too highly of the Hallberg Motor Generator and can recommend same to anyone desiring an outfit which will give satisfaction in every respect.