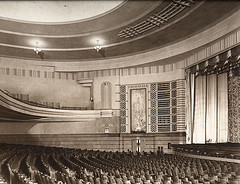 Opened by Associated British Cinemas(ABC) on 10th October 1938 with Charles Laughton in “Vessel of Wrath”. Originally it had 2,769 seats (1,086 in the circle, 1,683 in the stalls), it included full stage facilities which were used for number one presentations until 1969. Originally named Regal Cinema (one of ABC’s preferred names for its theatres), it changed to simply the ABC in 1961.

Tripled at a cost of 500,000 pounds in 1969 (a fortune then), it was the first such conversion in Europe and its new capacities were 870, 738 and 318 (still large). The complex had two large licensed bars as well as 70mm facilities in the two largest auditoria.

Closed by Odeon in December 2000 (they had their own theatre operating at that time on Clerk Street), the building was demolished, apart from the facade in January 2001.

A four-screen ‘miniplex’ is housed in the basement of the new office development now occupying the site which incorporates the original building’s facade. This opened as the Odeon Lothian Road on 5th September 2003. This would not exist but for a covenant on the building which stipulated that any new development must incorporate a cinema. But for this, Odeon would surely not have bothered as Edinburgh is rapidly becoming (like many parts of the United Kingdom) vastly overscreened.

On 19th March 1993, Historic Scotland designated the facade of the ABC a Grade B Listed building.

I used to work there and was at the closing do in 2001. Last time I visited it was all very strange to see it converted…
RB

So great city centre cinemas are closed down, and I mean the Odeon Clerk Street also, in order to have crappy and soul-less multiplexes which no one likes spending time in when the film is not being shown, and during this time are only perfunctorily utilitarian though also depressing or migraine giving. These cinemas used to make people happy. They were unpretentious and well thought out, and if they had a small bar, it would be a nice place to relax at. Aside from that, cinemas, as these did no doubt, should make the viewer want to treturn to the building. People just get sore heads nowadays with the crappy multiplexes. It is just that some people don’t want people to enjoy themselves. It is nothing else.

I have load a picture of the interior View (i hope I have loaded right one. (The pencil on back faded)

acs is spot on. When TVs are becoming ever more sophisticated, one would think cinemas ought to be going all out to offer something very different – including a sense of occasion and special atmosphere, something well maintained older cinemas can do so well. Cinema architects with flair and imagination have long gone, as have the theatrical elements which can create magic in most cinema buildings. The multiplex screen is naked, in a “black box” with airport lounge lighting – a conveyor belt for films and giant portions of predictable, expensive refreshments. If you’re lucky, the sound will be fair to good; if you’re lucky, the other cinemagoers around you might know how to behave in a public place. Chances are, in four months time, you could watch the film when you want, in Blu-ray quality and in the undisturbed comfort of your home.
As with everything, mercifully, there are exceptions to the general rule and there are cinemas I travel many miles to enjoy, like the Odeon and Empire One in Leicester Square, the Rex, Berkhamstead, the Plaza, Stockport, the Pictureville, Bradford and several other, largely independent, cinemas whose owners/operators know the value of putting on a good show around the film programme.

Mike_Blakemore on May 12, 2013 at 5:04 pm (remove) So.. Right.. Fanatical— Odeon… From when I started with ABC and finished being an Independent Circuit Director. I Expected and gave Presentation. to almost All Programmes. Inc of an Overture inc a suitable colour on the Tabs to set the mood.. Turning the sound up on Trademarks and screems Hmm.. The Bang of the Gong.. The Fox Fanfair.. The Roar of the Lion.. The Multiplex management are only interested in Coke and Popcorn sales. Cinema has lost “The Magic”

I used to work here in the early 60s when Les Lovell was the manager, I played Ice Hockey with his sons. It was the time that they started to have live bands like the Beach Boys and The Trogs and a few others it was a great time on Lothian Road 1960s was the best.

Photo uploaded of auditorium from the stage.

The opening of Europe’s first triple cinema, the ABC Edinburgh 1969:–