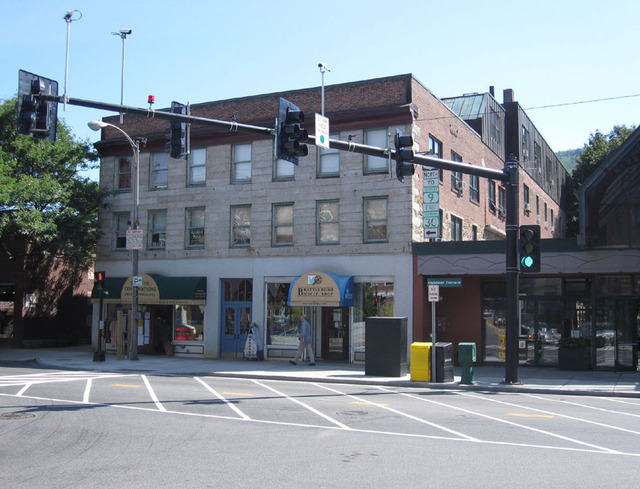 The Paramount Theatre was opened on October 20, 1937 with Irene Dunne in “High, Wide and Handsome”. It was designed by Nathan E. Goldstein who also operated the theatre. It was operated by Paramount Pictures Inc. through their subsidiary N. Goldstein. Gutted in a fire in 1991, the Paramount building now houses a bicycle shop in the lobby area and the auditorium has been converted into office space.

I managed this theater for a short time in 1973. We ran “American Graffiti” to packed houses. I still remember the laughter and footstomping to the music as it filled the theater.

This was a very beautiful little theater. It featured scenes along the walls that had small backlights. It also had an effects machine so that we could make “clouds” move across the ceiling and when the lights were dimmed, stars filled the night sky.

There was also an old organ in the pit at the foot of the stage.

At that time, the theater was owned by Western Mass Theater Associates, under the management of Nelson Wright Enterprises.

Here is an undated photo:
http://tinyurl.com/2mdxo8

The only remaining interior artifacts are the movie poster cases along the outer lobby, now filled with bicycle posters. The bicycle shop is in the former lobby area. The auditorium portion was so badly burned it had to be gutted and has been converted to offices. One hall wall has a large mural depicting the fire. Some of the brick walls were left bare, showing the scorch marks from the fire.

I was here last week on a cycling trip. Yes, the bike shop is in front and the other lobby store is “Save the Corporations for Themselves” clothing store and there’s an elevator in the back with many offices upstairs. It feels modern and open now. The bottom floor’s facade is a grey stucco and the top floor is a grey brick, the left side is red brick with fire escapes.

The mural in the back has the theatre on fire with a fireman in the watch. The marquee says, “Nightly 7” and “Dances with Wolves”. The center of the mural has many rows of the auditorium seats and to the left another pic of the marquee that says, “The Fire April 30, 1991, 7&9”.

From the 1950s a photo postcard view of the Paramount Theatre in Brattleboro.

1940?? I had always thought the Paramount opened sometime in the 1920s, based on the decor, but my memory isn’t the best. At any rate, it’s a shame it’s gone.

My grandfather was the first manager of the Paramount in Brattleboro in the late 1930s. His family was in Springfield, MA while he worked in Brattleboro. He later moved to Northampton, MA and managed the Calvin Theatre.

The Theatre Historical Society archive has the MGM Theatre Report for the Paramount; it’s Card # 572. Address is “Main St.” There is an exterior photo dated May 1941. Condition is Excellent. It says the theater opened 1937 and is not showing MGM product. 700 seats.

6 photos added. One from 1952 is particularly clear.