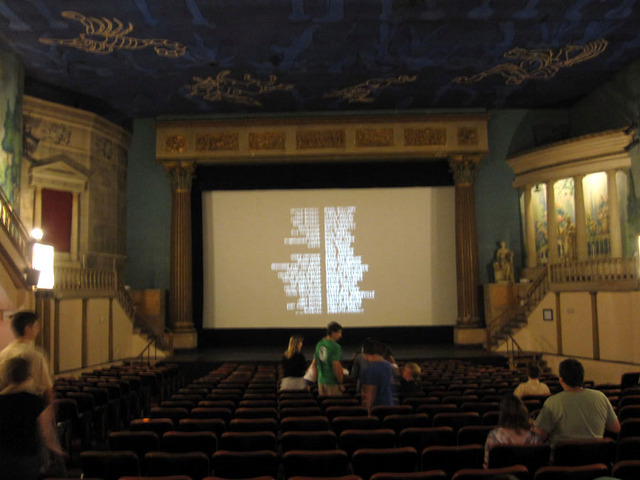 The auditorium of the Latchis Theatre was built as a factory in 1900. On April 13, 1920 it opened as the 500-seat Latchis Theatre with Douglas Fairbanks in “When the Clouds Roll By”. By 1926 it was listed as the Latchis Opera House. A totally renovated Latchis Memorial Theatre was opened on September 22, 1938 with Sonja Henie in “My Lucky Star” plus a stage show. It had 1,140-seats. Although the Latchis Theatre is now a four screen cinema, the 1938 Atmospheric style auditorium has remained fully intact. Two additional theatres have been constructed in areas once occupied by the Latchis building and hotel, the second screen opened on January 16, 1987 and the third screen opened on June 24, 1988. The Latchis' foyer and lobby are also in good shape. In 2008, a fourth auditorium was opened in what had previously been retail space, and this is used for live performances and presentations.

As the theatre prepares for a restoration effort, its movies continue on. The Latchis building, which contains a hotel, retail space and of course the Latchis Theatre, is one of only two Art Deco style buildings in the entire state of Vermont.

The Latchis Theatre is also the last of more than a dozen Latchis movie houses which once operated throughout New England. This one originally opened in September 1938.

The Latchis is planning some renovations for summer of 2012. This will include replacing about 90% of the seats (and refurbishing the remaining 10%), restoring the ceiling of the main auditorium (and the signs of the Zodiac) and putting in new carpeting, and some removations to the walls in the Ballroom audotorium. This should be all done by the end of August.

I will never forget going to the Latchis in my early teens with my best friend to see “The Sound of Music” when it first came out. It was a beautiful theatre, even back then.

I believe that the auditorium section of the building (completely remodeled in 1938) was the original Latchis, with a different lobby section extending out to Flat Street. When the Lathis Hotel was built in 1938 at the corner of Flat and Main Streets, they ran the lobby through the hotel building and demolished the old lobby. The auditorium building dates back to at least 1900, and was used as a factory before becoming the original Latchis. It looks very old and originally had windows along the sides (the brick frames for the windows are still there).

Renovation update: The Latchis closed the main auditorium on August 1, 2013 to begin the renovations. They are virtually done and will reopen Saturday October 19, with documentarian Ken Burns presenting the latest episode of his multi-episode documentary on the Rooosevelts.

They are continuing their fundraising but have already raised all but 32,000 of the 550,000 cost of the project.

Renovations include a new Marquee, new seats, new carpeting, some mechanical and safety upgrades and other stuff.

When the auditorium re-opens there will be frequent concerts, film festivals, special appearances and other events in addition to first-run movies.

The renovation is complete, and the theatre re-opened with a concert and then Gravity moved in to complete its run. I’ve put up 20+ photos in the gallery. A beautiful job! New seats, new carpeting, auditorium floor repainted, revamped lighting (the main square lights on the sidewalls are now multicolored.)

The atmospheric ceiling has been repainted midnight blue and the zodiac signs have been repainted a brilliant white (which glows faintly when the auditorium lights are out). No “stars” but maybe there will be some in a future renovation. What remains to do is restore the proscenium and sidewall Greek pediments, possibly some stage improvements and they’re pretty much done. Auditorium 2 was supposed to have been renovated too but I didn’t get to see it. I know all seats in 2 and 3 were replaced (aud 4 is all new, and the marquee was restored some time ago.)

The Theatre Historical Society archive has the MGM Theatre Report for the Latchis; it’s Card # 571. Address is “Main Street”. There is an exterior photo dated March 1941. Condition is Good. The report says that the theater opened in 1938 and is not showing MGM films. There were 820 orchestra seats and 320 balcony seats, total: 1,140. The 1940 population of Brattleboro was 9,600.

1941 Jack Delano photo in below Shorpy link. Latchis marquee on the left. Click on “View full size” for greater detail. 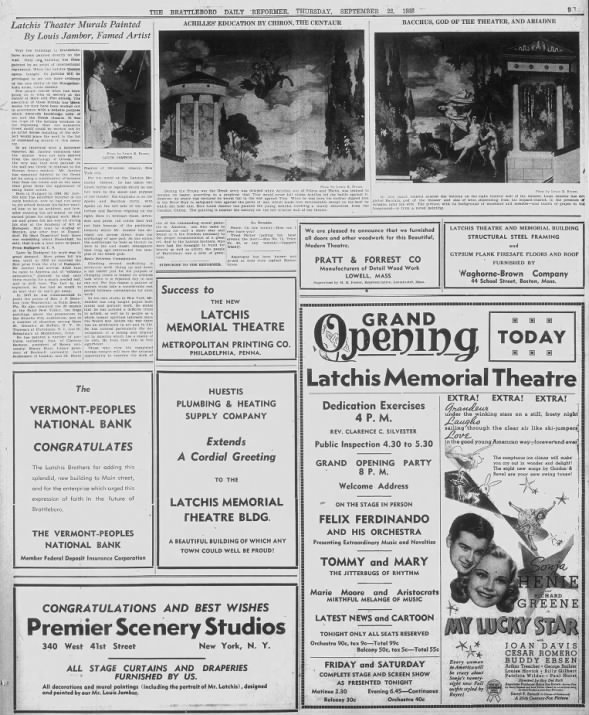