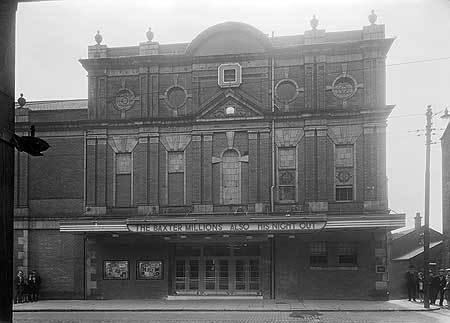 Opened as the Palace Theatre of Varieties on 9th November 1908 with variety acts headed by Fred Russell, also included in the bill was Ruffell’s Bioscope. Architect Bertie Crewe had designed the Palace Theatre with a total seating capacity of 2,380, in stalls and pit, dress circle, gallery and boxes. Over the years all the main stars of music hall and variety appeared on the stage. It closed on 25th October 1935 with a variety bill headed by Burton Brown.

The theatre had been purchased by Oscar Deutsch’s Odeon Theatres Ltd and architect Harry Weedon was employed to gut the interior and transform it into an Art Deco style cinema with 1,707 seats in stalls and circle. The exterior of the building remained structurally unaltered apart from a new canopy and entrance doors.

It re-opened as the Odeon Theatre on 19th August 1936 with May Robson in “The Baxter Millions” and Edward Everett Horton in “His Night Out”. In July 1974 it was converted into a triple screen cinema and this remained open until it was closed by the Rank Organisation on 15th October 1983 with “Psycho II”, “Educating Rita” and “The Meaning of Life”. The building lay empty and unused for nine years until 1992 when it was demolished. The Link Centre, offices of a social services centre operated by the local council was built on the site.