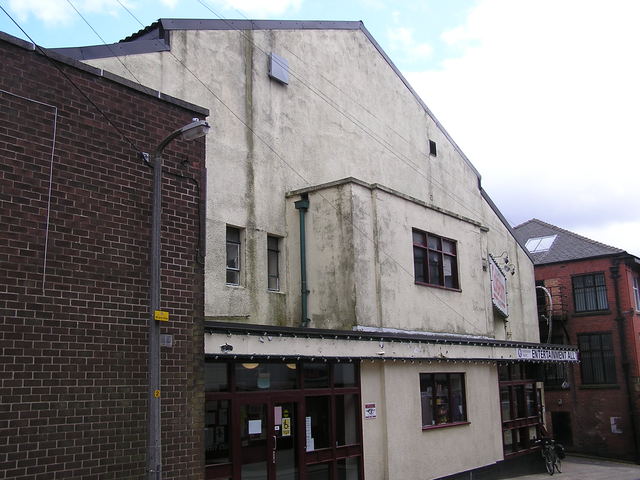 Built as a replacement to Meyer’s New Grand American Circus which was located on Henshaw Street. The Colosseum Theatre was designed by a local joiner Thomas Whittaker who had been operating the earlier circus building and was originally built entirely of wood.

The Colosseum Theatre opened on 16th June 1887 with Culleen’s Circus with a seating capacity given at the time for 3,000. Seating was later reduced when the building was split in half, one section becoming the stage and dressing room area, the other the auditorium which provided for 334 seats in the Stalls, 206 in the Circle and 130 in the Gallery. It went on to stage variety shows (Charlie Chaplin appeared here) and short films became part of the programme in the early 1900’s.

In 1931 it was purchased by a young man named William Cedric Bailey who converted it into the Colosseum Super ‘Talkie’ Theatre. A projection box was installed, the facade was modernised and the stage house was demolished. The first film shown was John Longden and Nora Baring in the British made war drama “Two Worlds” on 23rd March 1931. Unfortunately, this was the period of the Depression and the Collosseum was not a great success. The cinema closed on 23rd October 1931 and fixtures and fittings, props, scenery and costumes from its theatre days were auctioned to raise money.

The Colosseum re-opened on 26th October 1931 with Edmund Burns in “Sea Devils” and Bob Steele in “Sunrise Trail”. But this was not to last and it closed as a cinema on 3rd January 1932 with Chester Morris in “The Bat Whispers”. The building remained closed and shuttered until 1939.

It was taken over as a new home for the Oldham Repertory Club and re-named Coliseum Theatre. For the first few years it operated as a theatre club, but eventually it opened up to become a public theatre. In 1964 – 1966 the remains of the wooden structural parts of the building were replaced by masonry, the projection box was removed. In 1974 a new fly tower was added above the stage. It continues today as one of the North of England’s leading theatres.