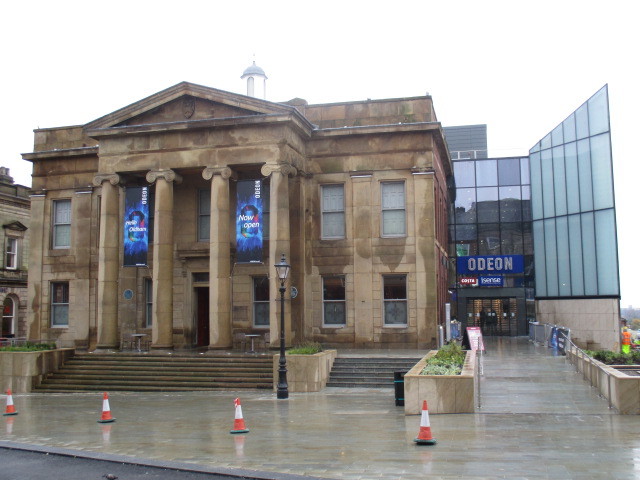 In the centre of Oldham, formerly in Lancashire but now part of Greater Manchester, the Old Town Hall is a Grade II listed Georgian Neo-Classical style town hall that was built in 1841.

Sir Winston Churchill made his inaugural acceptance speech from the steps of the town hall when he was first elected as a Conservative MP in 1900. For many years the political centre of the town, complete with courtrooms, the building was vacated in 1995 and fell into complete dereliction.

In September 2008 it was reported that the building was only months away from a major roof collapse. A tour taken by local councillors and media concluded with an account that “chunks of masonry are falling from the ceilings on a daily basis … the floors are littered with dead pigeons and … revealed that the building is literally rotting away”.

In October 2009 the Victorian Society declared the Old Town Hall as the most endangered Victorian structure in England and Wales.

Plans to convert the hall into a leisure complex, incorporating a cinema and restaurants, were revealed in May 2012. The subsequent £36.72m project saw the opening of a seven-screen Odeon on 21st October 2016.

While the cinema auditoriums have been constructed within the existing building, a full-height glazed extension has been built at the side to house the escalators and stairs that lead up to foyers from which five of the auditoriums are accessed. The box office, in the original building but facing the extension, is accessed through the entrance to the extension, while a Costa Coffee outlet has been built in the original town hall entrance. A corridor leads through to the box office.

Screens 1 and 2 are on the ground floor, while Screens 3 to 7 are accessed from the upper level.

Many original town hall features have been retained, primarily some doorways and floors in some of the hallways. The three auditoriums I saw inside were basically ‘black box’, although the one on the ground floor did have some side wall decoration reminiscent of the original town hall.

There are a large number of heritage information displays and photographs on the foyer walls in the original building. There is even a poster case from the original Oldham Odeon (1936 to 1983) containing a poster for “Here We Go Round the Mulberry Bush”, the 1968 sex comedy starring Barry Evans.

On my visit, on 28th October 2016, just one week after the cinema opened, I saw “Doctor Strange”, starring Benedict Cumberbatch, in Screen 3. This is the largest, and is equipped with iSENSE technology that utilises an ultra high-definition screen, measuring 15m by 6.2m, and Dolby Atmos sound.

Photos of the Odeon, taken in August 2018 can be seen here:–

“Before and after" conversion photo slideshow.