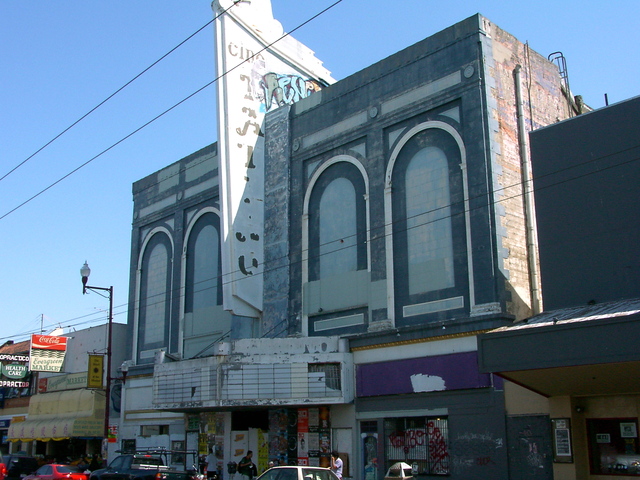 One of the oldest in the city, it had previously been known as the Wigwam Theatre (when it opened in 1913), New Rialto Theatre, and Crown Theatre from October 17, 1947. It closed as the Cine Latino in 1987. In the fall of 2013 the building was gutted internally and the facade was removed.

Motion Picture Herald of June 8, 1935, reported that Fox West Coast Theatres had reopened the New Rialto Theatre in San Francisco following extensive remodeling. Earlier that year, the March issue of Architect & Engineer had reported that the plans for the $40,000 remodeling project had been drawn by architect F. Frederic Amandes.

Amandes was the architect for at least four other theater projects. Those I’ve been able to attribute, all from 1936, were the Enean Theatre at Pittsubrg, California, and remodeling jobs for the Strand Theatre in Alameda, the Egyptian Theatre on San Francisco’s Market Street (listed at CT as the Guild Theatre), and the former T&D Theatre in Richmond, which became the Fox Theatre and then the United Artists Theatre.

The January, 1913, issue of the trade journal The Architect and Engineer of California said that architect William H. Crim had designed the new Wigwam Theatre that was to be built in San Francisco’s Mission District.

Was this once a Loew’s house? One sunny afternoon in 1980 I was waiting for a bus on Mission Street. On the side wallsign of the Cino Latino I could make out the word “Loew’s” showing beneath faded paint…

I walked by this theater yesterday. The vertical sign is gone and the building is being torn apart. But on the up hand, I spoke with someone in the know there, and apparently it is now going to be a gym, and the marquee and vertical sign will be restored to its former glory eventually.

The project to convert this theatre to something else (a gym perhaps, according to a previous post?) seems to have stalled, but not before the complete obliteration of not only the marquee and vertical sign, but the entire facade, down to only the most essential structural steel members. The stage fly tower has likewise been stripped, and large holes have been cut in the sidewalls. Only the ornamental quoins which wrapped around the corners of the facade’s edge remain. It is hard to imagine that any semblance of marquee or sign will reappear on what seems to be a remodel designed to eliminate any decorative trace of the building’s theatrical past. I hope I am wrong.

An earlier post talked about a 1930s renovation of this theatre according to a design by F. Frederic Amades, and then listed other theatres he worked on. I would like to add that he also designed the Parkside Theatre (Fox Parkside) at 19th and Taraval.

Whatever is happening with the Wigwam/Crown/Cine Latino still looks stalled 2 full years after Woody London’s 2 photos were uploaded showing about the same progress as the photo I took yesterday. What does seem clear though is that any vestige of the theater (other than the side walls) is completely gone. By typing in the address on the online SF Building Inspection Permit/Complaint page there appears to be no details for building permits other than 1 that was issued in 2007 although on 3-2-2015 someone lodged a complaint over steel beams being added disturbing neighbors at 3-4am every night when no noise permit had been applied for.