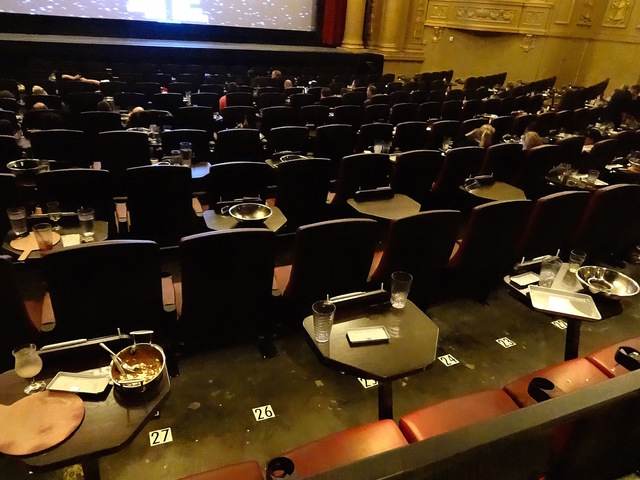 The Mission Theatre was opened in 1907. It was a narrow theatre on the west side of Mission Street, between 21st Street and 22nd Street. It was renamed Premium Theatre in 1911 and renamed Idle Hour Theatre in mid-1913.

In 1916, the architectural firm Reid Brothers reused the original theatre as an entrance lobby to their newly built auditorium of the 1,500-seat New Mission Theatre that sits on Bartlett Alley, behind the Mission Street storefronts. It opened May 6, 1916 with Mary Pickford in “Poor Little Peppina”. It was operated by Kahn & Greenfield. The entire building was now in a Spanish Colonial Revival style and the auditorium had 1,500 seats, all in the orchestra level. On November 15, 1917, a balcony was added, which was said to have 1,000 seats. In 1918 a 300-seat second balcony was added.

In 1932, for the Nasser Brothers circuit, architect Timothy Pflueger transformed the theatre especially the outer lobby, marquee, and 70ft blade sign, into an Art Deco style wonderland with 2,012 seats. After closing as a movie theatre in the 1980’s, the former New Mission Theatre spent the next 25 or so years virtually unaltered as a furniture store.

In 2001, the City College of San Francisco proposed to raze much of the New Mission Theatre and build new campus facilities inside the theatre’s building. Believing that more of a theatre could be retained while still achieving the school’s goals, a local group called ‘Save the New Mission Theatre’ lobbied to stop CCSF from executing its plans.

In 2012, Alamo Drafthouse announced plans as its first venture into California, to convert the New Mission Theatre into a five-auditorium cinema with a total of 550 seats. Designed by architectural firm Kerman Morris Architects, the main original orchestra level of the auditorium retains its 1920’s proscenium decorated with friezes of horn-blowing nymphs on ponies, and has a 55ft wide screen, 320 seats, and waiter service. The other auditorium range from 20 to 150 seats. Three auditoriums are located in the former balcony and the second largest auditorium is in the former balcony mezzanine.

The New Mission Theatre was designated a San Francisco Landmark building on May 18, 2004. Included in the listing are lobby, marquee, the balustrade and the décor in the auditorium, and have been restored to their original lustre. The Alamo Drafthouse New Mission Cinema opened December 17, 2015 with “Star Wars: The Force Awakens”.

Star Wars Episode VII will be the first attraction at the Alamo’s New Mission when it opens Dec 17. The first few days of showings are already sold out.

Another SF Chronicle article on the New Mission’s opening next week.

The New Mission’s status should be changed to Open.

Added 17 new exterior and interior photos – all taken 1-1-16. Saw Star Wars in 3D in theater #1. Nice big screen and excellent sound with equally excellent 3D projected on a Sony 4K system. Wondering what the ambient noise level would be like since food is served at your seat and was gratified to see it was kept at an absolute minimum. The back of my seat though got banged a few times by servers as they scurried by. Also before the movie started a short video announced that the auditorium was a text free, talk free space and that if you violated that rule you would be thrown out. They also played a cell phone message from a disgruntled patron who had been ejected which was hilarious. The theater (and auditorium #1) looked great – curtains and masking were used. Alamo did a fine job on the renovation of the New Mission.

It’s always amazing when they sit for this long and then come back. The renovation looks fantastic.

Two slide shows with both vintage and modern photos of the New Mission Theatre can be found on this page of the web site of Kerman Morris Architects, the firm that handled the recent renovation for Alamo Drafthouse.

Principals of the firm are Elizabeth Kerman-Morris and Edward Morris.

The Kerman Morris Architects link I posted earlier says that Architectural Resources Group (the correct name of the firm) acted as historic preservation consultants on the project. ARG’s own web site has several excellent photographs of the theater.

I hope some one from the Cinema Treasures site can post a better photo then the dirty theatre set up like the one that greats you now when you go to this New Mission site. The old cinema has way better photos to put on the first photo. Thanks!