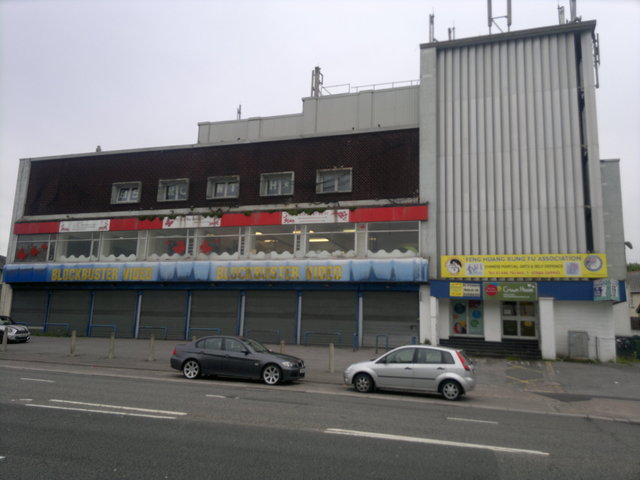 In the late-1930’s the Splott Circuit planned to build two new cinemas at the western and eastern edges of Cardiff to cater for the new housing being built there. The work was divided between two of the local architects with W.S. Wort working on the County Cinema and J.D. Wride of J.H. Phillips and Wride entrusted with work on the Ely site.

The first set of plans show a different site was originally chosen with the name Apollo. Following a decision to simplify the design of both new cinemas,to be faced with brick instead of more expensive materials, new plans were submitted and construction began in 1939.

On the new site on Cowbridge Road West, a cinema later named Avenue Cinema, with a brick tower at the entrance, was constructed. At the same time Mr. Wort’s design for the County Cinema in brick but similar in style to his earlier concrete-built Monico Cinema was erected and opened in late-1939.

The grand opening of the Avenue Cinema took place on 12th February 1940 with Deanna Durbin in “Three Smart Girls Grow Up”, shown for Monday, Tuesday, and Wednesday. The interior decoration was “peach pink”, and the proscenium was modified to accomodate a CinemaScope installation in 1955 and decorative neon lighting was fitted outside in the same year.

The first television transmitter serving Cardiff had opened less than two miles away, and when another opened in 1958 a number of cinemas were threatened as audience numbers fell.

The Ely area was also served by the larger Regent Cinema under the same ownership and although only twenty years old, it was the Avenue Cinema which closed on June 17th 1960.

The building has survived, first as a car dealership and offices, and in recent times films have returned, though on video and DVD at a Blockbuster store.
Exterior cladding hides much of the original design and the roof supports a number of cellphone antennae. It is now a Phoenix Fitness Gymnasium

Nobody seems to have commented on the fact that this cinema was almost identical to the County in Rumney.

They were , in fact, though similar in size, designed by different architects.The plans may be inspected at the Glamorgan Archive.
Externally the County was similar to the same architect’s work on the Monico, with a corner entrance,but built of brick rather than concrete.

The Avenue, originally named Apollo at the planning stage was re-designed to save cost but had a “tower” at the entrance end which survives beneath metal cladding.

You are right, I worked at the County and attended the Avenue as a child (I lived in Ely so the “Reg” and the Avenue were my local cinemas), the Monico I discovered much later but was always struck by the similarity of these venues

Checking my research notes I was surprised to find just how different the Avenue and County actually were, both externally and in the layout of the seating. Unfortunately the Monico was outside the Cardiff boundary when built so the plans do not form part of the current
archive collection.
The shell of the Avenue has survived fifty years after closure as a cinema,much adapted and with surviving external features covered, used by a variety of other businesses.

Hey— My comment was that thesefamiliar buildings were sinilar to ME, and indeed to friends who also lived in the area. What is this? the last word syndrome?

Location is actually about 1 ½ miles west of point shown by Google map, the building is still there, much adapted.

Geoffjc is correct.Cowbridge road is a very long road that is split into two parts for address purposes.The Google map and picture shows Cowbridge Road East.The correct address for the former Avenue Cinema is 364-372 Cowbridge Road West,Ely,Cardiff,CF5 5BY.I looked up this address on Google and got a very good 2008 view of the building.The shutters at the front of the Blockbuster Stores are where the windows for the new Howell’s Garages Car Showrooms were inserted after the cinema closed.

Further modification and decoration of the building has now taken place ( following the closure of Blockbuster).

My father Raymond Clarke was employed at the opening not sure whether he was manager or projectionist.he went there from the Rialto cinema in whitchurch which was owned by a man called Willis dad said the Rialto had rats.that sometimes ran over customers feet! he stayed at the avenue until he joined ENSA and after the war bought a Cinema in Cornwall.