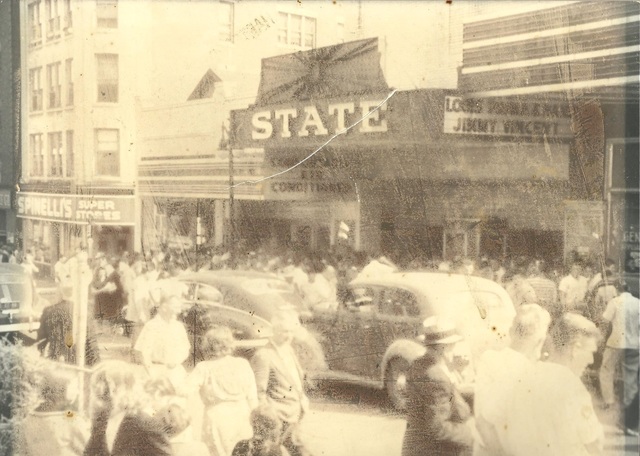 The State Theatre opened in 1926. By 1933 it was operated by Warner Bros. Circuit Management Corp. and was listed a (Closed) in 1936, but soon reopened. This massive theatre, which originally had 3,908-seats in its heyday was still open in 1957. Now just a memory of another lost Hartford movie palace.

Mary Rohan and Bill Foley were teenagers in the late 1930’s who often were called to the stage at the State Theater to do the “jitterbug”. Does anyone have any memories of these events to share?

Wow ! The State Theater.I can’t hark back to my childhood without talking about the State, it is interwoven with my fondest of memories from my earliest recallections to the day the music died in 1960. My Father was backstage Manager and Maintainence Manager for the State from early 40’s to it’s demise in may ,1960. I spent every possible moment at the state, either backstate on the weekends or in the theater itself during the week I would help my father carry tins of film to the projection room, whick by the way was located high above the massive main floor via a catwalk in the domed ceiling.
I was always scaredd to death of that treck, but I hid my fears pretty well , as I did not want to let my Dad know. Ted and Sam Harris ran the State, myself,my brother, and 2 sisters, called them Uncle, they both could not have been more wonderful to us. (I was the youngest born in ‘47 my brother '45 and sisters were'44 and '43)
I recall on one occation My brother slammed my pinky in our backdoor and when he opened it the tip was just hanging by a thread, so my Dad ran my over to the State and Uncle Sam’s office where Her quickly got a needle and thread and sewed it back on. By the way 57 years later it still looks great. I was about 6 then. Another memory comes to mind, while Pat Boone was slotted for a weekend, He wanted to see Elvis perform on the ed Sullivan Show (in 1956) tv’s were not plentiful back then, so my father brought him to our apartment, for a viewing on our round screen Philco TV, Pat stayed for the entire performace had a few cookies and a cold drink and left with my Father to perform next door. (My sisters both thought Pat was DREAMY lol)I can close my eyes and see the backstage area, mostly painted in battleship gray(some of which was painted by yours truely) the 8 or so dressing rooms, one of which My father used as a darkroom to develope his many pics, He was an amatuer photographer also (Bill’s photo service) and That room was also used for many of the guys to just Jam. I also have great memories of those sessions. Ahhh yes the State Theater my playground growing-up. If you listen closely you can hear my Dad yelling out “5 minutes, 5 minutes till showtime…” As an aside the coffe that all the stars raved about that my father made for them was “Chuck full Of Nuts” brand LOL

Hi. If anyone has any photos, newspaper ads, or other memorabilia from the 1950’s rock ‘n’ roll era, I’d really appreciate hearing fro you. Write to me at Thanks.

DSchneebeeli,I worked at the State Theater from 1957-1960 and helped out your dad (Bill)backstage and also in the office with Ted Harris.
I still have his card from The Valley Kennels.He also worked at the Strand Theater in Hartford.Hope you read this and anyone else who worked at the State,please contact me at
Thank you.Robert Varrick

Just wondering by chance if any of you remember John Wynn,He worked at the State back in the 1930’s, 40’s. He was my Grandfather. He use to bring my Mom and her brother there. My Mother remembers the State Well. She will turn 80 next June and would love to get more infor for her. please contact me at Thank-you

On Saturday 10 February 1951, Bela “Dracula” Lugosi presented his in person Horror and Magic Stage show at the State. Currently I am conducting research on all things Lugosi; if anyone out there actually saw this show and/or has memorabilia (poster, handbill, photos) related to this show, please contact Bill at I already have copies of the newspaper ads related to this show. Thanks in advance for any assistance!

Does anyone remember seeing Gene Krupa at the theater? I think I was about 10 when he played there at the intermission between two movies and he looked pretty stung out – I think on heroin.

According to David Junchen’s “Encyclopedia of the American Theatre Pipe Organ” pg. 144, the State Theatre in Hartford, Connecticut originally had a Geneva theatre pipe organ, size not known or not given in the book, installed in 1926. The serial # of the organ’s blower was 19551. Does anybody know what happened to this organ and where it is today? Thanks!

have stories when my mom went to The StateTheatre in Over about he 50’s, we only the “white” people in the audience . I was a teenager, born in 1941. I went to the State Theater from 1955 and saw the last show, featuring Brook Benton a Connie Francis.

I have one story when I took my brother to introduce him to doo wop in the 50’s. The price jumped up ( also we walked from the south end (Vernon Street) to the north end of Hartford.

We got turned away. A man with a gray hair , limp, and goatee told the cashier to let us in for the money we had. When the show started he was the MC (The Hound Dog) http://doowop.guru

I am just about to send 75 Hollywood autographed pics that my mother collected (all signed and “to Millie”) when she worked as the ‘concierge to the stars’ at the State Theater in the 1930’s and pre war 40’s. Great head shots of Mae West on a lounge, a young Louie Armstrong, Tommy and Jimmy Dorsey, Sammy Kaye, the Andrews sisters the three stooges (with Curly) out to auction. Ozzie and Harriet (separately),Ruddy Vally, Ella, Lional Standish and so many many more. I heard many stories like the time she took Sammy Kaye to the roller skating rink and ripped her skirt then had to wear Sammy’s jacket wrapped around her to go home. She baby sat for David Nelson when Ozzie and Harriet went out to dinner. When my cousin went in to see Mae West she was on her lounge and said to my 5 year old cousin “come up and see me honey”. Great stories for great stars that performed at the State. It sat close to 4000 people and was a hub for Hartford night entertainment. Movies were only secondary to live performances.