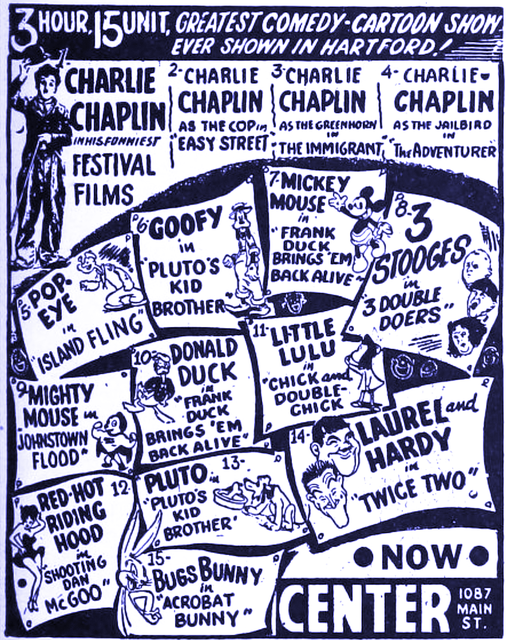 This entry is for the competing Grand Theatre begun in 1912 and opened in 1914. By 1938 the Grand Theatre had switched to motion pictures, becoming the Proven Picture Theatre. Broadway booking agents Al & Belle Dow of New York took on the theatre and on June 18, 1944 went back to its live roots as the remodeled Dow Theatre. That winter, a blizzard toppled the marquee so the theatre returned to its original Grand Theatre name. But the Grand Theatre had turned to burlesque which led to a much-publicized conviction for immoral theatrical exhibition under the aegis of Al Dow from New York in 1946.

Needing an image change and bookings quickly, the theatre turned to art cinema on May 16th with “Open City” and “Ten Days That Shook the World” while Al and Belle Dow found new operators to run the theatre on a 20-year lease. The Grand Theatre changed to the Center Theatre once it got domestic bookings in 1947 and under Herman Salvin and Maurice Greenberg’s Continental Circuit. Continental tried to use its magnitude of the Center Theatre’s 1,200 seats as a roadshow theatre. The roadshow concept appears to have been a failed concept as the house turned to second-run fare.

Maurice J. Greenberg finally dialed up a name from the past changing the Center Theatre to the Parsons Theatre in 1952. Bernie Menschell and John Calvocoressc took over the struggling Parsons Theatre in 1955 under their Bercal Circuit. Under Bercal, the theatre had its last big event which was a Connecticut premiere of MGM’s “Lust for Life” with Kirk Douglas starring.

A series of new managers tried to breathe life into the location befitting of the Parsons nameplate but it wasn’t meant to be. Shy of its 50th anniversary, the Grand/Center/Parsons was ultimately demolished for a multi-million dollar east-west highway across the Connecticut River connecting east and west Hartford East Hartford in December of 1960.

Was this theatre called the Cameo in the early 1930s? I have several ads for the Cameo from 1932. It is supposed to have been next to the Florida Orange Grove store, which was at 1083 Main Street, near Trumbull, which sounds like where the Parsons was located. I’m going to presume it was one and the same until someone corrects me.