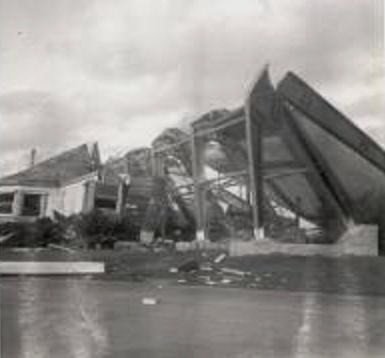 Located in the Oak Lawn district, the Starlite Drive-In had one screen and was opened September 3, 1948 with Cornel Wilde in “The Walls of Jericho”. The original screen was blown down by the tornado of April, 1967. It had a playground at the base of the screen. It also was open year round and had propane beehive type heaters, but you used your drivers license as collateral. They also owned the giant fiberglass slide out by the marquee along with a go-kart track. For a couple of years they rented snowmobiles in the winter to run up and down the long driveway.

I once snuck in the drive-in alone —with 3 kids in the trunk I also went there on a first date—I went to the washroom—and got lost for a half hour because I forgot what kind of car my date drove DUH!! I also remember Terry’s Discount store and I think there was an A&P grocery store in the same shopping area My grandma loved A&P’s blackberry jam!!!

This drive-in was my families business for all the years growing up. I would go there in my PJs to visit my dad. We did not only go-karts but pony rides, and anything else to get the crowds in. It was exactly what one would envision a 1950s/60s drive-in movie should be.

Does anyone have any photos of the Starlite Drive-in? My friends and I used to go there and I’d love to surprise them with a memory of 38 eyars ago. thanks.

Approx. address for this drive-in was 6551 95th Street. The entrance was about where B Of A is located now.

Yep. The entrance was probably about where that new traffic light was put up at the far west side mall entrance on 95th street right next to the bar which has been there forever (including when the Starlight was still there). Speaking of memories of the Starlight and the Studio I remember seeing Jerry G Bishop, in person as the original Svengoolie, at the Studio on Halloween eve 1970. He was a DJ on either WLS or WCFL and also doubled as Svengoolie on channel 32 when they were just a fledgling station on UHF. They were not part of Fox at that time. They were WFLD (FieLD Communications). Man those were the days!

there was an A&P and a Terrys there….my mom would go there with her car full of kiddies back in the 60’s….i remember it was a treat cuz the stores were both real big (to us !!) i remember the tornado of ‘67…blew down the drive-in, part of the high school there and part of St Gerald’s school too.

This opened on September 3rd, 1948. Its grand opening ad can be found in the photo section.

Opened with “The walls of Jericho”.

Address was 6400 West 95th Street per the print ads in the gallery.