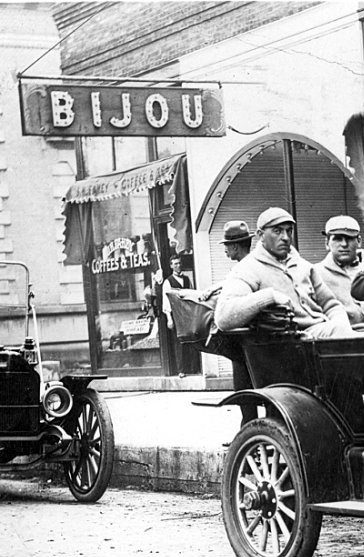 The Clarke Theatre appears to have been new construction in 1936, though it’s possible that the side walls were common walls shared with the adjacent buildings (often the case in old business districts of small towns) and thus would have belonged to both the Bijou and the Clarke. Everything else was probably new, though. Here’s an item from the May 2, 1936, issue of The Film Daily:

A timeline of Mattoon’s theaters on this web page says that the second Bijou Theatre opened in 1910. The first Bijou operated from 1905 to 1908. I’ve been unable to discover if the first and second Bijous were on the same or different sites.

The March 21, 1908 edition of The Billboard lists a Bijou Theatre, S. 17th Street & Broadway Avenue. Managed by Ira Seybert, it had 250 seats, and evening shows.

This reopened as Strand on July 31st, 1917. Grand opening ad in the photo section.