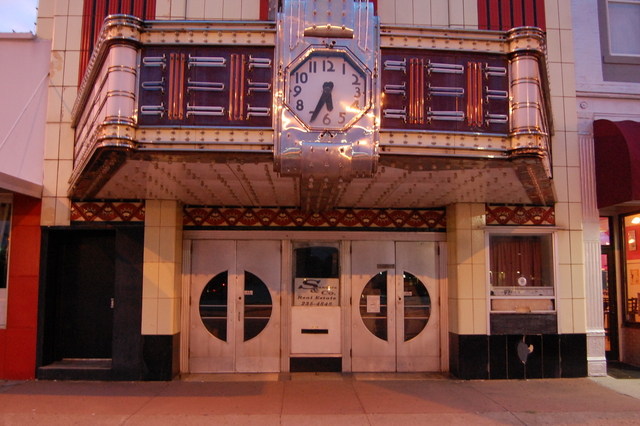 The Grand Theatre was opened December 19, 1910 and was gutted by fire in 1938. It was entirely rebuilt in stunning Art Deco style, and renamed the Time Theatre, reopening August 18, 1938.

It was operated by the Frisina Amusement Co. in the early-1940’s.

Its glossy cream-colored glazed terra-cotta facade, with two bands of maroon colored tiles flanking the center panel, featured a V-shaped vertical sign with the theatre’s name on each side. The marquee, trimmed with multi-colored neon lighting, featured an octagonal-shaped clock with a band of steel behind it, very much resembling a wristwatch.

Below, the set of doors, with their semi-circle windows and curving stainless steel handles, looked like something from a luxury liner of the era.

This beautiful example of late-Art Deco style theatre architecture was twinned in 1985, but stopped showing movies in the 1980’s. In 2002, the theatre was transformed into a concert venue/banquet hall, its landmark facade still in nice condition. This use lasted a couple of years before the building was closed again.

Recently, the Apostolic Center church of Mattoon has been using the former Time Theatre for presentations of Christian-themed live dramas.

I was in 5th grade at St Mary’s School when the nuns took the school to see The Sound Of Music at the Time Theater in 1965. It was a memorable day not only to go to see a movie during school, but also we had a tremendous ice storm that night that closed school for 2 days! Glad the theater is still there and in good shape!

An earlier entry says that the K Theatre, which opened in the 1700 block of Broadway in 1913, burned in 1937 and was not replaced.

Thanks everyone for posting the pics of the Time Theatre. Does anyone have any pics of the Mattoon Theatre inside or out?

I took a few pictures of the Time Theater when I was there this past Summer. I do have one picture of the interior that I shot by holding my lens up against the window of a door.

Here’s a link to the first photo. You can see the rest by paging through my photostream from there.

I have exterior photos of both the Time and Mattoon Theaters in 1977 (when we moved away), but will have to post them to a public site. I’ve never been able to find any online photos of the interior of either theater.

The “Theaters Planned” column of The Film Daily for May 21, 1938, said that the Time Theatre in Mattoon would be designed by architect Paul Leaman, but I’ve been unable to find any other references to an architect of that name, so it might be a typo. I’ve found a single reference to a Decatur, Illinois, architect named Paul Lehman, but it is from 1965.

This opened on December 19th, 1910 as Grand. Grand opening ad in the photo section.

This opened on August 18th, 1937. Its grand opening ad can be found in the photo section.