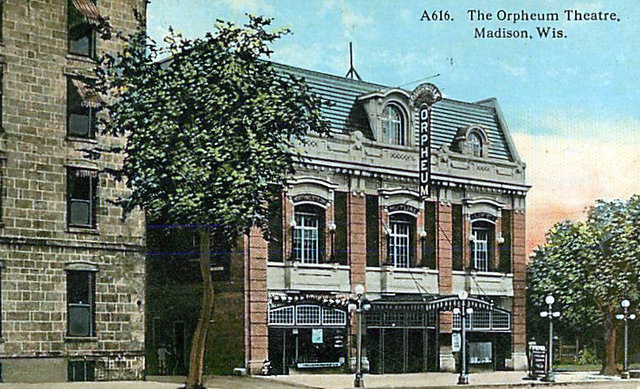 Madison had an earlier Orpheum Theatre which was renamed the Garrick Theatre when the current Orpheum Theatre was finished in 1927. The building was built about 1911 as part of the national Orpheum vaudeville and theatre circuit. It was apparently remodeled into a movie theatre in 1936 and a renamed the Madison Theatre.

It is highly likely that it was capable of showing movies before that time but more research needs to be done on this lost theatre. Good pictures of the building appear in a book entitled Double Take by Zane Williams. The theatre was demolished in 1957. The building is attributed to Rapp and Rapp because of its similarities to Dubuque’s Majestic Theatre from 1910 and to other early Rapp and Rapp designs.

I just remembered that the theatre was definitely a Rapp and Rapp because it is cited in a newspaper article from the Champaign Daily Gazette dated March 17, 1914 announcing the construction of the new Orpheum theatre in Champaign. The article states, “The plans for the new theatre were prepared by C.W. and George L. Rapp, architects of Chicago. The Rapps who make a specialty of theatre designing. They are the architects of the beautiful Majestic theatre in Chicago and have planned several theatres for the Finn & Heiman company, include (sic) the Orpheum theatre in Madison, Wisconsin…”

There was an “New Madison” theatre that opened on November 18th, 1936

The correct address, for google map placement should be

The Orpheum was listed at 115 Monoa [sic] Avenue in the 1914-1915 American Motion Picture Directory. It’s likely that it presented movies as well as vaudeville from early in its history. Orpheum circuit houses in smaller cities typically operated as combination houses by the mid-1910s, as it was more profitable than two-a-day vaudeville shows in such places.