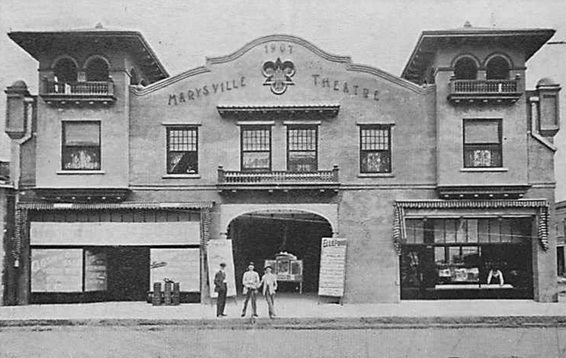 The Marysville Theatre was built in 1907. By 192 it had been renamed Atkins Theatre. It was later renamed National Theatre and was destroyed by a fire on July 29, 1926. It was replaced National Theatres much larger Liberty Theatre.

The Online Archive of California provides this 1908 photo of the Marysville Theatre, from the collection of the Yuba County Library. The date on the facade above the name (and note the “Theatre” spelling) shows that it was built in 1907. The architectural style is Mission Revival. The information page for this photo, however, gives the location as the NE corner of 1st and D Streets, which does not match the address above. After poking around on the Internet, I’ve found confirmation of this.

So, Marysville Theatre; built 1907; aka Atkins Theatre; on D Street at NE corner of 1st (probably 103 N. D Street, the current address of the Tower); succeeded by the Tower Theatre, not the National/State.

jmetcalf: Ken McIntyre won’t be able to fix the description, or correct the address. That will have to be done by one of Cinema Treasures' moderators. The reason Google Maps Street View is fetching a picture of the State Theatre is because the address on this page is wrong. This page is for the Marysville Theatre, at 1st and D Streets, which (along with the nearby Elks Lodge and a small building between them) burned down in 1926. The State Theatre has its own page.

There’s been quite a bit of confusion over the theaters that have operated at 1st and D streets (the Marysville/Atkins/National, and the Liberty/Tower,) and it has spilled over into confusion about the State Theatre. This comment by tspauld on the Tower Theatre page clears most of it up.

The Marysville Theatre was built in 1907. By 1921, it was being operated as the Atkins Theatre (here is a fresh link to the Marysville/Atkins Theatre page at Pacific Coast Architecture DB, cited in my earlier comment.) By the time of the 1926 fire that destroyed it, it had been renamed the National Theatre. After it was destroyed, the National Theatres circuit built the Liberty Theatre on part of the same site.

An earlier Liberty Theatre, located on 2nd Street, was closed a few days before the new Liberty was opened. Meanwhile, a new National Theatre, the one that later became the State Theatre, was built at 515 E Street.

The Tower Theatre, opened in 1941 at the Marysville/Atkins/National/Liberty’s historic address of 103 D Street, was apparently an extensive remodeling of the Liberty Theatre that had opened in 1927.

Although most of your comment of February 26, 2008, pertains to the State Theatre, I think the part about the temporary theater on the site of the burned National must pertain to the Liberty/Tower. The Tower occupies the Liberty’s footprint, but the Liberty’s footprint was different than the Marysville’s footprint. The Marysville’s building occupied the corner lot where the Tower’s parking lot is located, and probably the space where the Tower’s auditorium is located.

The Tower’s entrance, even though it has the same address as the Marysville Theatre, appears to be on the site of the small building that stood between the theater and the Elks Lodge before the fire. I would imagine that the temporary theater you mentioned was on what is now the site of the parking lot.

Here is an item from the January 5, 1924, issue of Exhibitors Herald which fills in another missing piece of the history of the Marysville/Atkins/National Theatre:

“L. R. Crook, president of the National Theatres Syndicate, announces the purchase of the Atkins theatre from Frank Atkins at Marysville, Cal., also the Webster theatre at Woodland. These houses will be entirely remodeled and renovated.”