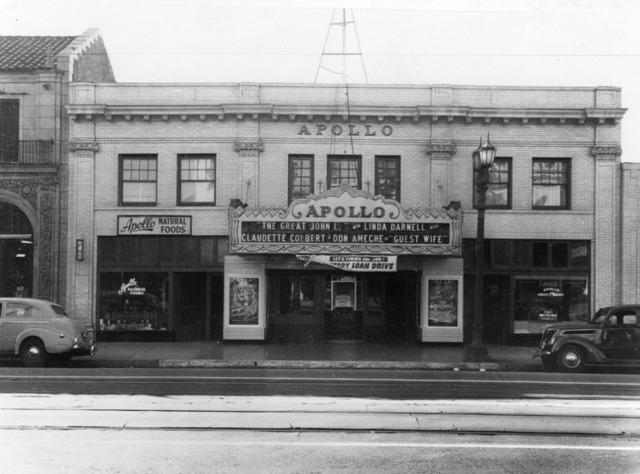 The Apollo Theatre was built for West Coast Theatres and opened on February 17, 1921 with Charles Ray in “Nineteen and Phyllis” & Bobby Veronon in a Christie comedy “Hey, Rube”. Fox’s Apollo Theatre was located on Hollywood Boulevard near N. Western Avenue and it seated 600 people.

It was later renamed Apollo Arts Theatre and finally from April 30, 1971 the Star Theatre. It was destroyed by fire in December 1976. The remains have since been razed and an apartment building now sits on the site.

This is where I worked when I met Louis Federici. It was named the Star at that time. We were exhibiting nudist films and had a sell out audience on weekends. It was owned by an attorney and another “gentle"man, that I could never stand. They phoned the theater hourly to see how many tickets had been sold. I finally got fed up with the "gentle"man and quit. And was hired at the Hollywood Theater for the second time. This was around 1959-1960.

fscscott, the polished concrete on the sidewalk is called terrazzo.

Shalom, buballa! Who can forget the “Star” Theater’s 49 cents days, and the ebullience of the recorded message when you’d call in. Saw It Came From Outer Space in 3D here, as well as less memorable pictures such as Butterflies Are Free. Great theater; sorry to hear it’s immolated.

Does the Cinne Arts adult theatre a block or two away from the Apollo count as a movie theater?
View link

The February 9, 1921, issue of The Film Daily ran this item about the Apollo Theatre:

“Los Angeles — The new Apollo on Hollywood Blvd., which will be about the last word in elegance among residential district picture houses, will open shortly with a pre-release of the latest Christie special comedy, ‘Hey, Rube,’ featuring Bobby Vernon, as one of the features.”

I’ve finally have discovered who was the architect of the Apollo Theatre, in this item from the August 11, 1920, issue of Building & Engineering News:

“HOLLYWOOD, Los Angeles Co. Cal. Hollywood Blvd. near St. Andrews Two-story brick theatre and store building, 50x174. Owner- Hollywood Theatres. Inc. Architect— C. S. Albright. 5910 Hollywood Blvd., Los Angeles.”This was apparently the second building for the Apollo Theatre, which was in operation as early as 1919 either on the same site or nearby. According to a brief article in the November 8, 1919, issue of a local magazine called Holly Leaves, the Apollo, located east of St. Andrews Place, was to get a new building on the south side of the boulevard 140 feet east of Wilton Place. That project, also to have been designed by Albright, apparently fell through, as the 1920 project as built was still located east of St. Andrews Place.

C. S. Albright was probably both an architect and a builder, as I’ve found a few references to him receiving construction contracts for various projects during this period.

The 1919 article can be found at the lower left of this page at Google Books.

Is there anything on the site now?

There is a rather dull apartment block where the Apollo Theatre once stood, though the Spanish Colonial Revival style building next door has survived.