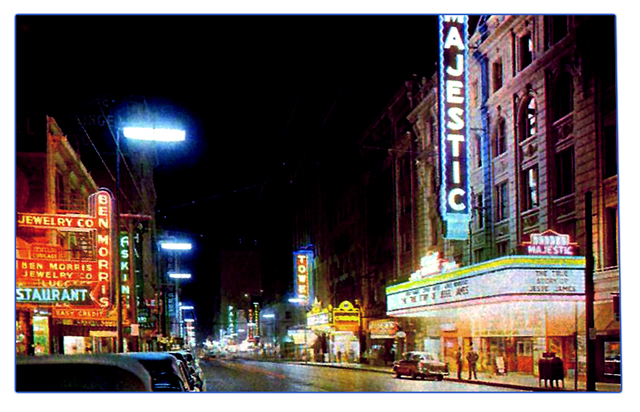 Located in the same downtown block of Elm Street as the Majestic Theater and the Melba Theater (later Capri Theater), this Interstate Theatres Inc. operated theatre opened in 1937 and had a small box office opening on the street that led into what appeared to be an office building. The entry off Elm Street ran straight to the rear of the house. There were no distinguishing decorations inside that I recall (dating back to the 1960’s), but it was obviously one of Interstate’s crown jewels. There was a large, vertical sign on the front. By 1941 it was operated by Paramount Pictures Inc. through their subsidiary Hoblitzelle & O'Donnell.

It played many hard ticket, reserved seat bookings, including “Exodus” in 1960 and “Cleopatra” in 1963.

The Tower Theater was closed in 1970 and the building was remodeled, the theater house portion became an entry mall that faces the street behind the building - Pacific Avenue. The building has been closed, but is due (in 2008) for remodeling into condo and apartments in the next couple of years.

Does anyone remember the color of the TOWER curtin? The question came up in a conversation last week.

IIRC, it was red.

I saw more movies at the Tower than at all the other downtown Dallas theaters combined – isn’t it odd, then, that I have such vivid memories of what the Majestic, Capri, and Palace looked like inside and have virtually no memory of what the Tower looked like. Could it have been that plain?

I read that the Tower auditorium was actually housed in a completely separate, purpose-built building (built 1937) that sat behind the Tower Petroleum Building (built 1931) that housed the theater’s Elm Street boxoffice, entrance, and lobby; and that in 1951 the Corrigan Tower building was constructed to sit over and around the auditorium building (http://www.dallasarchitecture.info/towerpet.htm).

Can anyone comment on the arrangement (lease, easement, part ownership?) that must have been made between Interstate Amusement Corp. and ownership/management of these other two buildings in order to effect this type of situation?

The finding aid for the Interstate Theatre collection at the Dallas Public Library lists the Tower Theatre as a project designed by architect W. Scott Dunne, with drawings dated August 10, 1936. The project included the “[c]onversion of building at Elm St., Pacific and St. Paul.” That would be the Tower Petroleum Building, which Dallas Architecture says was designed by architect Mark Lemmon.

From 1958 a photo postcard view of the Tower along with the Majestic, Palace and Melba on Elm Street in Dallas.

Interstate reached the finish line with its Highland Park Village shopping center in 1935 with the name scheduled to be the Tower Theater named after its beacon tower. But that theater was ultimately named the Village using the shopping center’s namesake. But Interstate picked up the name for its modestly-priced $125,000 W. Scott Dunne architected final count 1,320 leather trimmed seat Tower Theater. An intriguing project found within the Tower Petroleum Building and extending beyond it. A wrecking ball was taken to one existing portion of the Tower Building with a few parts of the walls used in the theater which received a new steel frame construction. George P. O’Rourke Construction built the entrance right through the just- vacated Webb Waffle House in the Tower Building beginning in August of 1936. The auditorium was constructed thereafter opening February 19, 1937. The lobby of the theater had a giant aquarium by Irwin Waite with tropical fish, aquatic plants, wall to wall mirrors, and neon-lighted handrails. Eugene Gilboe painted the murals to match. Interior of the theater’s auditorium, however, was not close to matching. It was downright spartan as the themed palace days were ending. And the diminutive budget for such a downtown theater was clearly spent elsewhere.

The Tower opened with the film, “Rainbow on the River” with star Bobby Breen in attendance and reverted to being the second-week run for pictures leaving the Majestic or Palace after one week. It got a refresh when it was closed for nine months while a building extension to the larger Tower Petroleum Building was made called the Corrigan Tower above and around the theater beginning on March 14, 1951. When it reopened on Christmas of that year, the 1930s were gone replaced by new murals and cleaner look along with an air conditioning system. The lack of thematic movie palace elements helped the theater stay contemporary as did innovation. The new Tower agot into closed circuit sporting events staring with the Rocky Marciano Roland La Starza fight. It was a $50,000 experiment by Interstate. Theater Network Television (TNT) also played operas and symphonies via closed circuit which continued through 1955.

But the Tower hit its stride updating its projection in the 1950s and 1960s allowing for large format screenings with 70mm projection, stereo sound, exclusive sneak previews, and roadshows such as El Cid, The Happiest Millionaire, Patton, and Ben Hur. In fact, to many locals, the Tower was the “Ben Hur” theater. In November of 1959, William Wyler came to Dallas to show a sneak preview of the film. The Tower would go on to have Ben Hur for almost one full year. But as the Central Zone took off with Interstate’s Medallion and Wilshire, as well as General Cinema’s NorthPark, UA’s Ciné 150, and others, downtown theaters took a precipitous turn as population shifts and free parking at suburbans were in favor. Rather abruptly, the Tower was closed just after July 4, 1971 with the last feature of “The Seven Minutes.” Since that times out almost precisely to 35 years from the date of the previous tenant leaving the Tower Building and Interstate beginning, it would likely indicate an end of lease situation. The Tower’s lobby was retrofitted for a business soon thereafter. The auditorium stayed boarded up until December of 1978 when the spot below the Corrigan Tower was finally deconstructed.

The Longest Day opened at the Esquire, which also played host to West Side Story. As for the Northpark Cinemas, I believe it was Cinema II that carried hard ticket films. Besides Dr. Zhivago, it was also home to Oliver.

Saw “Cleopatra” at this theater in 1963. Friend of mine was manager and invited his buddies from Oklahoma to be his guest for the first run showing. Was really surprised at how small the theater was but, it was nice and they really had a packed crowd that at that evenings showing. Movie, fantastic!