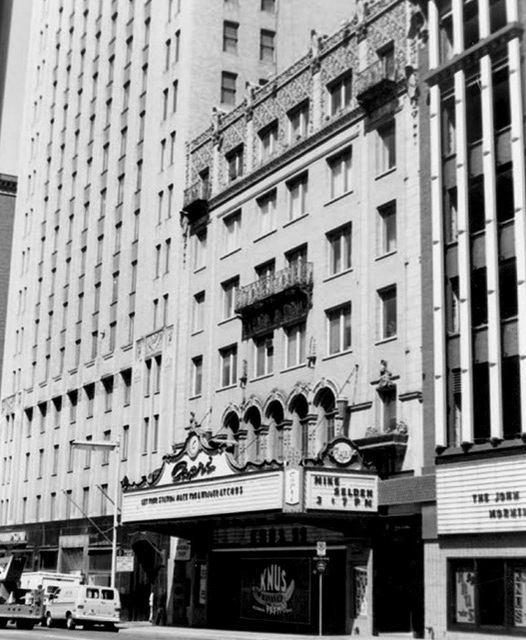 The Hope Theatre, on Elm Street in Dallas, opened on April 26, 1922 with Buster Keaton in “The Cops”. It was designed by W. Scott Dunne and Alfred Charles Finn. It was operated by First National Theatres and later in 1922 it was renamed Loew’s Melba Theatre when Loew’s Inc. took over. It was taken over by the Interstate Theatre circuit around 1939. and by 1941 it was operated by Paramount Pictures Inc. through their subsidiary Hoblitzelle & O'Donnell. It originally had a 3/11 Wurlitzer organ which was opened by organist George Perfect.

The Melba Theatre showed the first 3-D movie, “Bwana Devil”, in 1953, and a year later, began showing Cinerama films, beginning with “This Is Cinerama”. From 1960 until closing in the 1970’s it was named Capri Theatre and has since been demolished.

The July, 1922, of a trade journal called The Poster, touting itself as “The National Journal of Poster Advertising and Poster Art” ran a half-page article about the use of poster advertising by new Hope Theatre in Dallas, which it said had opened on the evening of April 26. There is also a photo of the theater’s entrance (scan at Google Books.)

According to the June 3, 1922, issue of Exhibitors Trade Review a novel feature of the Hope Theatre was the inclusion of a hostess on its staff. Her function was apparently to promote the theater to the women of various clubs and civic groups. The article includes a photo of a group of women meeting in what is presumably the theater’s lounge (scan at Internet Archive.)

Bryan’s intro on this theatre contains an error: it incorrectly states that Interstate took over this theatre and renamed it Melba; Loew’s was the second owner, taking over in 1922 from First National Pictures and their financial backer from Houston, Jesse Jones, whose mistress – First National Pictures star Hope Hampton, Jones named the theatre for. Loew’s renamed it Melba. Interstate assumed the lease in about 1939 or ‘40.

My twin brother and I played the Wurlitzer organ at the Capri after it was restored by members of the local American Theater Organ Society. I don’t remember the exact year, but it must have been 1959-1960 ish. We were students at SMU, helped with the restoration efforts which would start after the last showing and go well into the early morning hours. Once the organ was playable, we would play between showings. I understand that one reason the organ survived the fate of many is that the Cinerama screen covered it up, and very few people knew it was there. Bill Thompson

Linkrot re-repair: The May 9, 1960, Boxoffice article about the reopening of the former Melba Theatre as the Capri is now at this link.

I Thought I remember putting a comment.I did not notice it here, well. I Remeber going to Dallas from Texarkana Texas to see my first Cinerama film at the Cari,“ How the west was won. Later on, when we went back to Dallas to take the plane to visit our Mexican relatives, we were going to see the Greatest Story ever told, but, we did not have any time.I was disappointed cause I wanted to see the Capri again.

Melba postcard added that appropriated the artwork from the original Hope postcard. Link to the latter in description of teh former.