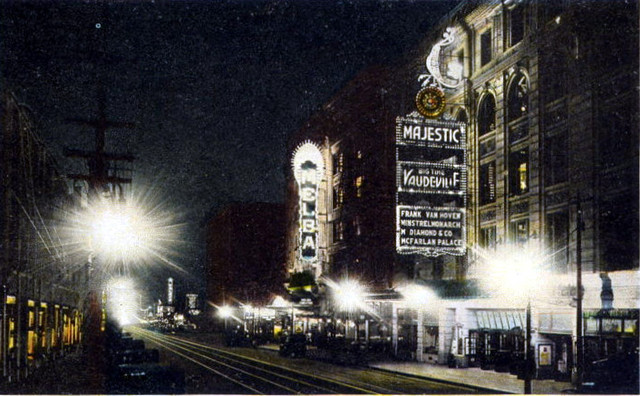 The theater was reopened by the city of Dallas along with donations from private and corporate supporters in 1983 after undergoing a transformation to accommodate more seating for performing arts and concerts.

The Three Stooges performed here during the vaudeville area which would have been during 1921-1934 for them. At the time they were working with Ted Healy and the act was called “Ted Healy and his Stooges”. Healy was the star and was the most successful vaudeville performer in the country making $9000 a week in the 20s. Healy started out as a cartoonist for the Houston Chronicle and met vaudeville performers and entered show business. You can hear a radio interview with Stooge Moe Howard talking about when they performed at the Dallas Majestic Theater and did a joke about Baylor University and the people of Texas where planning on throwing eggs at them! Its on the DVD Stooges Men Behind the Mayhem

1956 photo added of the opening of “Giant”, photo courtesy of Wendy Wilson. Whose mother worked in the concession stand at this time. Via the Traces If Texas facebook page.

1967 photo added courtesy of the Traces Of Texas Facebook page.

1959 the Majestic had the “world premier” of “The Killer Shrews” and “The Giant Gila Monster” twin bill. Newspaper article added to the “Photo” section.