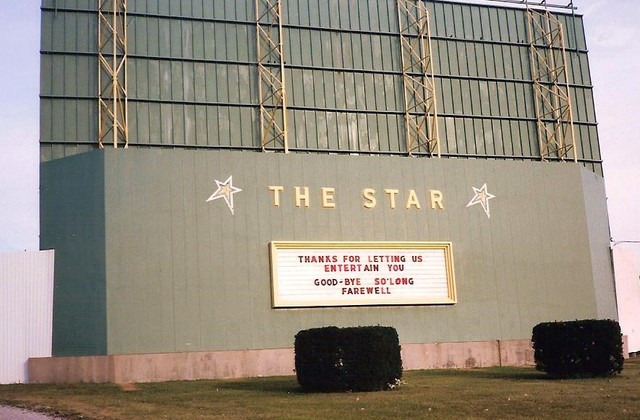 In June 1952, as D. Lee McLain was building his new airer in Wauseon, OH, he did not have a name for it. It became known as the Wauseon Drive-In. He was also at this time operating the Skyline Auto Theatre and the Rex Theatre, both in Morenci, Michigan. He finally decided to name his new airer the Star Auto Theatre which opened on August 2, 1952, screening the 1952 action/western “The Big Trees” with Kirk Douglas, Eve Miller and Patrice Wymore. Al Boudouris(dba the Entertainment Equipment Company of Toldeo) were the contractors hired to build the new auto theatre. Al Boudouris was a well-known name in the building and operating of drive-in theatres. He founded EPRAD(Electronics Products Research and Development) which developed equipment for theatres including drive-in speakers. Bob Cooper would be the manager of the new Star Auto Theatre. It will have a car capacity of 303 cars with in-a-car speakers. Cooperative Theatres Inc. of Cleveland, OH was their booking & buying agency from 1952 to 1999. In April of 1955 the Star Auto Theatre reopened with a wider screen for screening CinemaScope movies.

In August of 1957, Ohio Drive-In Carterers, Inc. leased the operation of the concession stand at the Star Auto Theatre. Leasing out the concession stand was a common prectice in the 1950’s-1960’s theatres, most of the time you would get inferior and high price food. In 1960, Leroy Wyse and his son Richard Wyse formed a partnership and bought the auto theatre from McLain on June 27, 1960. At this time both Richard and his father did not plan to leave their present jobs. Leroy was the local manager of the Colonial Finance Co. and Dick was local representitive for a potato chip company. During this time the lease with Ohio Drive-In Caterers Inc. was terminated. Eventually the Wyse family would open the Star Brite Laundromat and Star Mobile Home Court next to the auto theatre, both of which are still in business. After McLain sold the auto theatre he bought some property out by the Ohio turnpike on SR 108 and opened the Del Mar Motel. It is still standing as the Days Inn & Suites by Wyndham Wauseon.

Lost Memory…How did you have a picture of the screen submitted? Since it shows the add photo is offline.

From 1998: “Our Creature Feature this week is a double feature about skunks. And what better place than a drive-in movie theater to begin. The Star Auto Theater in Wauseon, Ohio is under siege by skunks drawn by French fries and snacks. The upshot, literally, is not conducive to amorous behavior by movie-goers in the back seat. "They let go their foul-smelling liquid and the smell drifts through the whole place,” said theater owner Robert Wyse."

The Star Auto Theatre closed on Saturday, September 18, 1999 after the final double feature (including “The Sixth Sense”) which drew 776 patrons. The reason for its sale was that the property was sold for $450,000 to a company called Star-Wauseon, according to then-assistant manager Ryan Wyse. Ten years later no development has taken place; the screenhouse still stands in good condition with letterboard intact but minus its two neon stars. Inside, the field is overgrown and the projection/concession building and speaker stanchions are gone.

I booked the Star Auto for several years and I’m sorry to see that it’s closed. The Wyse family were very nice to me – I dealt with Richard Wyse. For a small town theatre, they would gross very well with the right picture and Paramount, Warners, Universal, etc. branch managers were very keen on getting their films played there. They were one of the few small-town theatres where I could get first-run print on some releases because the did that much business. Well run operation.

If you would like any information about the theater, I would be happy to provide it. My name is Ryan Wyse and Richard was my grandfather. He owned it from 1960 to 1990 where my parents, Robert & Kristy Wyse, took over the business. We operated until 1999 when we closed the doors forever due to a buyout that my grandparents couldn’t refuse. Our drive-in held a capacity of 302 vehicles and were usually open from mid April until late Sept- mid October (depending on the weather). If you would like pictures or any other info on the Star Auto Theater, please feel free to email me

They finally removed the screen which had stood (in various forms)) since 1952. It was very sad to see it go.

I was there the final Saturday night. Boy did the place fill fast when word got around that it was the last show. Cars were parked up against the fence and many turned away. I bet they had second thoughts about closing after that crowd showed up.

Above address does not map properly. Use 1092 North Shoop.

Only the ramps remain sadly.